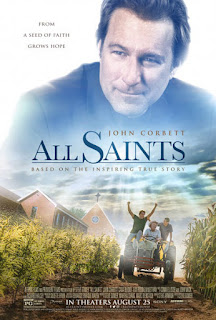 From the Website:
ALL SAINTS is based on the inspiring true story of salesman-turned-pastor Michael Spurlock (John Corbett), the tiny church he was ordered to shut down, and a group of refugees from Southeast Asia. Together, they risked everything to plant seeds for a future that might just save them all.

After trading in his corporate sales career to become a pastor, Michael’s first assignment is All Saints, a quaint country church with a dozen members. It comes with a catch: he has to close the church doors for good and sell the prime piece of land on which it sits. While developers eagerly eye the property and the congregation mourns the inevitable, Michael and his family look forward to moving on to an established church where they can put down roots.

But when the church hesitantly begins welcoming Karen (kuh-REN) refugees from Burma—former farmers striving for a fresh start in America—Michael feels called to an improbable new mission. Toiling alongside the Karen people, the congregation attempts to turn their fertile land into a working farm to pay the church’s bills and feed its newest people.

Jeopardizing his family’s future by ignoring his superiors, Michael must choose between completing what he was assigned to do—close the church and sell the property—or listening to a still, small voice challenging the people of All Saints to risk it all and provide much-needed hope to their new community.

My thoughts on this movie are somewhat scattered and few, but that's because I watched this movie last week and am just now posting a review. All Saints comes out in theatres tomorrow!

While I wouldn't say that the production and quality are exemplary in this movie (they aren't bad though), I loved it for the quiet country setting and close community. I also think that two major aspects of this movie apply directly to the North American culture today. Michael comes to a dying church (called All Saints) just after vowing to obey his church authority even when he disagrees (which I don't completely agree with in concept). However, his heart isn't cold towards the small church family and he doesn't desire to kick them out and close the church doors. He struggles with his priorities and responsibity to his denomination, while caring for the people under him. While I don't align myself with Michael's denomination, I think his struggle as a pastor and as a man with those under his care is a real one. Churches today (especially in Canada) are dying and closing often. And sometimes the hours of work placed into people and land and property are unrewarded. Even failure is possible. Michael faces challenges and ultimately failure in this movie and I think that is portrayed well.

As Michael pastors All Saints, the Karen refugees come seeking shelter and worship. Because only one speaks good English, they end up holding two services: one for the Karen, and one for the previous members. The church members weren't all excited about receiving these poor people, but they do come to accept them and cherish them. I think this is an important part for us today with the amount of refugees. I know that the refugee population isn't something the individual person has much say in, but it is our job to love the foreigner, welcome them, and help them transition to the culture while also respecting their differences. I think there is much hostility to refugees and those attempting to immigrate and it's hard to watch. In the Old Testament God specifically commands the Israelites to love the foreigner and leave some of the crop for them so they would be provided for. They were not Israelite-born, but they were loved by God nonetheless, and He still commands today that we love our neighbors.

Michael risks his heart, home, and health in staying with the Karen and All Saints, but he does so out of love for them. And I love this about the film--the struggle to commit and to stay even when you face failure and hardship. There was one theological point at the end that was rather glaring and I didn't quite appreciate; that of all religions coming together to create community. Perhaps it was meant well in the setting of the movie, but I do not believe it helps with the "coexist" mentality of todays religions. There is only one God and He does not allow competition with His glory, and there is no rival to His throne. Other religions do not just fall alongside of Him and believers cannot fellowship with those of other faiths like they would among their own. It was a small comment, but it referenced a bigger point of the movie, and it was one I majorly disagreed with and wanted to mention. But despite theological differences, I found much encouragement from this film and I would encourage those who know their beliefs to go watch it and learn to stand strong even when life threatens to capsize our faith.

*I will hopefully be receiving the book about this film in the next couple months! This film is based on a true story, so I'm excited to read and see how they compare.
*Movie has been provided courtesy of Sony Entertainment Releasing Canada and Graf-Martin Communications, Inc.
Posted by Kaleigh Stroink at 8/24/2017

Email ThisBlogThis!Share to TwitterShare to FacebookShare to Pinterest
Labels: 2017, All Saints, movie review, Nuts About Books