It's been quiet around here, but not for long! I've got a book review coming up hopefully this month, if not, then early next. But today is the cover reveal of an author-to-be friend of mine. She's been dedicated to writing this book for years and is finally reaching the publishing stages. Reading through one of her previous drafts made me want to hold this book in my hand, and I'm most excited to announce that the cover reveal is today! This book has loveable (and hate-able ;) characters set in World War 1. Join Ben and Jaeryn on their individual and collective journys as they seek out the truth regarding the spy ring in Folkstone, England. So tell your friends, send texts and emails, follow Schuyler on Facebook and Goodreads, and share the word that War of Loyalties will be here November 30th! 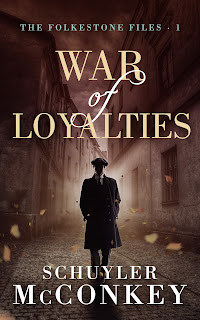 Book Description:
April, 1917. A ring of German spies threatens the coastal town of Folkestone, England. Newly-recruited agent Ben Dorroll must uncover which British citizens are traitors to their country. When his first attempt at espionage falls prey to a trap laid by German sympathizers, the security of the British Secret Service is threatened. Feeling lost in a strange country and aching for a steady place to call home, he wants to resign and go back to his American medical work. But when he learns that his family identity holds the key to capturing the spy ring, Ben has no choice but to unite with the mysterious Jaeryn Graham so that the truth can be discovered.

In the aftermath of the Irish Rebellion, Jaeryn Graham's British colleagues look warily on his Irish background. Always up for a challenge, he thinks his a new mission in the Secret Service should be an opportunity to prove his prowess. But after an encounter with death and alienating two agents, he finds the road to victory isn't as easy as he thought. Unless he can win the loyalties of his newest assistant, Ben Dorroll, his secret ambitions and his perfect success record will be destroyed.