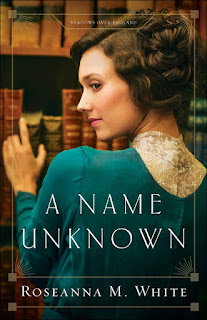 From Amazon:
Rosemary Gresham has no family beyond the band of former urchins that helped her survive as a girl in the mean streets of London. Grown now, they concentrate on stealing high-value items and have learned how to blend into upper-class society. But when Rosemary must determine whether a certain wealthy gentleman is loyal to Britain or to Germany, she is in for the challenge of a lifetime. How does one steal a family's history, their very name?

Peter Holstein, given his family's German blood, writes his popular series of adventure novels under a pen name. With European politics boiling and his own neighbors suspicious of him, Peter debates whether it might be best to change his name for good. When Rosemary shows up at his door pretending to be a historian and offering to help him trace his family history, his question might be answered.

But as the two work together and Rosemary sees his gracious reaction to his neighbors' scornful attacks, she wonders if her assignment is going down the wrong path. Is it too late to help him prove that he's more than his name?

My favorite thing about this book is that it contains authors and stories and libraries. Having a couple author or author-to-be acquaintances myself, I know a little bit of the author and story world from their perspective.

Rosemary begins a new "assignment"--stealing an estate. While she has no idea where this will lead or who she will meet, she readily takes up the dare...and maybe gets more than she bargained for. However, she quickly takes on the role of librarian with really no idea about what she's getting into.

I love the character of Peter. While I couldn't really relate to Rosemary as a character, Peter provided a kindred spirit throughout his story. Accused of being a traitor to England (because of his last name), and struggling to be a public figure because of his stutter, Peter relies on his faith to carry him through difficult times. Peter has access to the king, as Peter's family took on the role of counseling the royal families through the years and wants to use this and other documents to prove his loyalty to the Crown. He struggles internally but I love how his faith makes his life real and how he doesn't hesitate to stand up for himself or others who need it.

I love Peter's life...how he writes so intensely that people can knock on his door for hours and he won't notice them, and yet how he remembers to provide for his librarian should she need food. He writes secretly under a pen name, but doesn't shirk from asking for criticism in an indirect way. He and Rosemary have an interesting relationship, and I'll leave you to decide how it all works together. I had a hard time getting into the book and actually getting through it; somehow it felt like something "big" was missing in plot or action, but I can't put my finger on it yet. The romance wasn't completely to my taste, but for those who enjoy that sort of thing, it was written well. I don't know that I'll pick up the next books in the series, but perhaps I will because they'll be set during the war years. And I want to see who Mr. V really is. ;)

Check this book out if you're interested in thieves, royalty, romance, and libraries! :)

*Book has been provided courtesy of Baker Publishing Group and Graf-Martin Communications, Inc.
Posted by Kaleigh Stroink at 8/16/2017