Movie Review: The Case for Christ 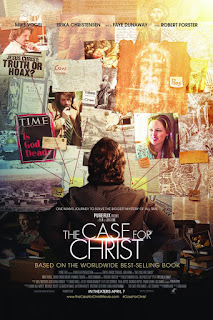 A hard-driving journalist, Lee Strobel was exactly where he expected to be at work: on top. His award-winning investigative reporting recently earned him a promotion to legal editor at the Chicago Tribune. But things weren’t going nearly as well at home where his wife Leslie’s newfound faith in Christ went against everything Lee believed—or didn’t believe—as an avowed atheist.

Utilizing his journalistic and legal training, Lee begins a quest to debunk the claims of Christianity in order to save his crumbling marriage. Chasing down the biggest story of his career, Lee comes face-to-face with unexpected results that could change everything he knows to be true.

I haven't done a movie review for a while, and I'm still deciding if I'd like to make it a habit, but when I heard of The Case for Christ coming out, I wanted to see it. When scouring through second-hand bookshelves and thrift stores for hidden treasures, I have often seen the book The Case for Christ sitting in the "religious" section, and I picked it up and skimmed through it a couple times but never bought it (yet ;).

I really enjoyed this film. While though not one of external drama and action, the quiet workings of the Lord in people's lives was refreshing. Lee Strobel begins the movie accepting a promotion and we soon find out that he is a staunch atheist. He has a precious daughter, however, and an incident in her life begins the conversion of Leslie, Lee's wife. I loved Leslie as a character. She didn't try to change her husband, though she didn't hesitate to witness to him. But she loved him for who he was and prayed faithfully for him. There are moments of tension in their relationship simply because of the opposing faith backgrounds for them. Lee begins a project to destroy the arguments for Leslie's faith and ends up with answers that are different than he expected--answers coming from even those who don't profess Christianity.

The message of this movie is definitely the story of Lee's journey to demolish the Christian faith. However, my favorite part of it was Leslie's story and faith through it all. The actors portray emotions and scenarios well. I would have liked the arguments for true Christianity to be a little more fleshed out and full, but the foundation was there, and I realize that a movie can only contain so much. I have found it a recent "trend" in current Christian movies though to portray a strong message, but not always strong logic for Christianity. Today's generations are in need of good arguments to answer skeptics questions, defend the faith against persecutors, and quiet the doubts of our own hearts at times. And I do think this is an area that needs to be improved in. But all in all, it was a good movie--one that captured my attention and told the story of a young family who found Jesus in unexpected ways.

You can find out more details about The Case for Christ HERE.

*Movie has been provided courtesy of Mongrel Media and Graf-Martin Communications, Inc.

Email ThisBlogThis!Share to TwitterShare to FacebookShare to Pinterest
Labels: 2017, movie review, Nuts About Books, The Case for Christ