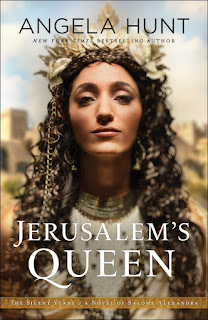 From Amazon:
Born in the small village of Modein, a town made famous by the warrior Maccabees, Salome Alexandra knows better than to harbor grand dreams for her future. She pales in comparison to her beautiful older sister, and though she learns to read at an early age, girls are not valued for their intellectual ability. But when her father and sister are killed, John Hyrcanus, a distant relative, invites Salome and her mother to live with his family in Jerusalem, where her thirst for knowledge is noticed and indulged.

When her guardian betroths her to a pagan prince, she questions HaShem's plan. When Hyrcanus finally marries her to a boy half her age, she questions her guardian's sanity. But though Salome spends much of her life as a pawn ordered about by powerful men, she learns that a woman committed to HaShem can change the world.

Shelamzion. The peace of Zion. With her father and eldest sister killed in an accident, and a mother who grieves that it wasn't her second-born daughter taken from her, Shelamzion begins a new life in Jerusalem at her uncle John Hyrcanus's household. Her handmaid, Kissa, quickly becomes her confidant even though Kissa is five years older. Thrown into a world of battle strategy and politics, Shelamzion navigates the servant-slave relationship beautifully. Abandoned at heart by her mother, she learns from Alena, John's wife, and Shelamzion's role model. The household quickly realizes that she is clever and intelligent, even if they recognize that she's not particularly beautiful. Little does she know that her devotion to HaShem and her study of the Torah will prepare her for a different life than she ever imagined, even though she is beginning to see how little she is valued by her own family.

Hunt once again tells a compelling story during the 400-year silence between the old and new covenant of Scripture. In a world where the wealth of a man was demonstrated by the number of his wife's himations (a colorful mantle) and the age of 20 was too old to be considered a beautiful bride, Salome Alexandra watches her life unfold in mysterious ways when she is required to marry a man about 15 years younger. HaShem, however, has a plan for her as a judge in Galilee, and a queen in Jerusalem.

Salome Alexandra's marriage and country are soon unstable, but she remains faithful to HaShem. Teaching her sons faithfully, worshiping with other citizens of faith, and acting on the Torah in ways that she can, she helps her husband rule during a rugged time of history. She find friends in place of family, courage despite unfaithfulness and immorality, life in the faith of death, and even lives through the golden age of Jerusalem after massacre and apostasy. Shelamzion, the peace of Zion, brings temporary peace and prosperity to Judea as she yearns and waits for the promised Messiah who would bring eternal peace to a world of turmoil.

Happy New Year to all my readers. Here's to many more good books in 2019!


*I received this book free from the publisher. I was not required to write a positive review; all opinions expressed are my own.
Posted by Kaleigh Stroink at 12/31/2018