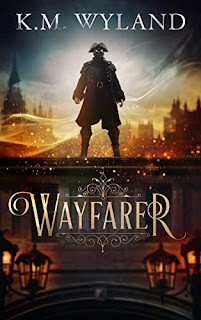 From Amazon:
In this heroic gaslamp fantasy, superhuman abilities bring an adventurous new dimension to 1820 London, where an outlaw speedster and a master of illusion do battle to decide who will own the city.

Think being a superhero is hard? Try being the first one.

Will’s life is a proper muddle—and all because he was “accidentally” inflicted with the ability to run faster and leap higher than any human ever. One minute he’s a blacksmith’s apprentice trying to save his master from debtor’s prison. The next he’s accused of murder and hunted as a black-hearted highwayman.

A vengeful politician with dark secrets and powers even more magical than Will’s has duped all of London into blaming Will for the chilling imprisonments of the city’s poor. The harder Will tries to use his abilities to fight crime, the deeper he is entangled in a dark underworld belonging to some of Georgian England’s most colorful characters.

Only Will stands a chance of stopping this powerful madman bent on “reforming” London by any means necessary. Unfortunately, Will is beginning to realize becoming a legend might mean sacrificing everything that matters.

Wayfarer begins with Will as a young apprentice seeking to rid his master of debt. He's heart-warming, if not a bit foolish at times. While trying to find better paying work, he stumbles across men who believed "the plague" was real. Gossip about unusually gifted or changed people who lived through miracles, it seemed. But Will denies that it exists...until he falls deeper into adventure than he ever dreamed. Adventure called Dr. Silas and Mr. Fitzroy.

Will's family died in the workhouse because his master only managed to save one, Will Hardy. He has plans and goals, but by the end of the book his life has taken on a new purpose and vision, even if it takes a whole adventure to refresh his mind. Will learns that sometimes people beneath your level in life can provide sweet friendship, and sometimes people above his station can give him vision and greater goals. And there are evil people in all ranks of life.

I love Will's relationship with Tom. Because Will grew up with no parents or siblings, Tom was his family and did his best to provide for Will like a father, while also training his apprentice. Indeed it was a task at times and would soon become more overwhelming than Tom probably imagined. Will's friendship with Rose teaches him to care for another in the way he would a younger sister. His protectiveness and Rose's independent ways creates an amusing bond at times. In Will's relationship with Mr. Fitzroy and Mr. Monarch, Will learns how people can be taken advantage of, what loss is, and how at the end of all things your social rank means nothing except that you treat all as equal in God's eyes.

Will unintentionally takes on the qualities of Spiderman (with a few limitations ;), and though charged with murder, he matures into a wiser young man and a good friend and brother. I love the friendship themes throughout this book and the sacrifices made and the character growth of Will were encouraging to read.
Posted by Kaleigh Stroink at 11/15/2018