Of Fire and Lions by Mesu Andrews 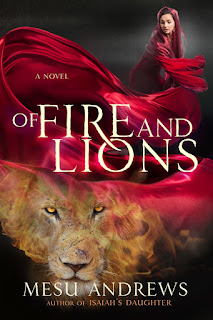 From Amazon:
Survival. A Hebrew girl first tasted it when she escaped death nearly seventy years ago as the Babylonians ransacked Jerusalem and took their finest as captives. She thought she'd perfected in the many years amongst the Magoi and the idol worshippers, pretending with all the others in King Nebuchadnezzar's court. Now, as Daniel's wife and a septuagenarian matriarch, Belili thinks she's safe and she can live out her days in Babylon without fear--until the night Daniel is escorted to Belshazzar's palace to interpret mysterious handwriting on a wall. The Persian Army invades, and Belili's tightly-wound secrets unfurl with the arrival of the conquering army. What will the reign of Darius mean for Daniel, a man who prays to Yahweh alone?


Ultimately, Yahweh's sovereign hand guides Jerusalem's captives, and the frightened Hebrew girl is transformed into a confident woman, who realizes her need of the God who conquers both fire and lions.

I didn't read the description of this book before I requested it, and every time I saw the title, I wondered what years of the Bible it would cover. For some reason, Daniel never came to mind, and fire and lions were quite a puzzle to me whenever I was reminded that I needed to read and review it. :)

This book opens by introducing us to Abigail, a mother to a large family, yet somehow shunned and estranged from them--all while living under the same roof. Her faithful companion and servant Mert is sure that things would be different if Abigail would just share her life story with them. But Abigail's not convinced. We also meet Daniel, Abigail's husband, who within minutes is dragged off to interpret a dream for King Belshazzar. The rest of the family seated at dinner is left shocked and distressed, especially since Daniel and his wife are now elderly.

After a couple chapters, we are thrown back in time to Jerusalem and Abigail's childhood in the court of the king. In the chaos that marks the court, Temple, and the years of Jewish history, she is soon an orphan--her life spared by the command of her mother to hide in the Temple. As Babylon takes Judah captive, Abigail must learn a new way of life, that of a servant to four boys: Daniel, Hananiah, Michael, and Azariah. While knowing what was expected of female servants in serving young men, Abigail fears her role, but knows it's the only way to survive. Daniel's kindness slowly wins her trust, and her intelligence leads him to instruct her in all that he's able to learn.

The God of the Israelites faithfully protects Abigail, even when she's separated from her friends, attacked by temple men and forced into pagan temple work. While in today's century professing Christians might turn their backs on God, Andrews shows how that could happen differently back in Daniel and Abigail's time, and Abigail ends up as a high priestess to Mithra, a pagan god.

I love Andrews attention to detail in her books. The names of the pillars of the temple, the bread in the Holy of Holies, the curtain decorations, the cherubim, and the Ark of the Covenant especially. Andrews addresses the controversial topic of eunuchs throughout Of Fire and Lions, because it is part of royalty life. I like her take on it, and while Daniel chooses to marry, his three friends have a revelation from God, as to what being a eunuch really means. Andrews weaves the story of Shadrach, Meshach, and Abednego's trial by fire, and Daniel's own personal testing in the den of lions. The history regarding King Cyrus and King Darius was very interesting, and Andrews explains a bit more of in the notes at the end of the book. She also does an excellent job allowing kings to be kings in all authority (whether right or not), while also demonstrating that God works through them in providing mercy to the Jews--whether that takes place in everyday court life or in the return of the Jewish exiles to rebuild Jerusalem.

Another story of hope and redemption through pagan kings, friendships with queens, wicked priests and temple workers, plagues and health, secrets and vulnerability, and war and miracles. Just like the Jewish captivity had an end for God's people, so our captivity here on earth and in these bodies has an end when the Son of David returns to claim his throne.


*This book was provided free from the publisher. All opinions are my own; I was not required to write a positive review.
Posted by Kaleigh Stroink at 1/17/2019

Email ThisBlogThis!Share to TwitterShare to FacebookShare to Pinterest
Labels: 2019, Mesu Andrews, NetGalley, Of Fire and Lions