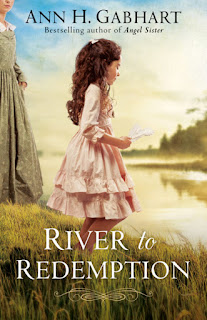 From Amazon:
Orphaned in the cholera epidemic of 1833, Adria Starr was cared for by a slave named Louis, a man who stayed in Springfield, Kentucky, when anyone with means had fled. A man who passed up the opportunity to escape his bondage and instead tended to the sick and buried the dead. A man who, twelve years later, is being sold by his owners despite his heroic actions. Now nineteen, Adria has never forgotten what Louis did for her. She's determined to find a way to buy Louis's freedom. But in 1840s Kentucky, she'll face an uphill battle.

Based partly on a true story, Ann H. Gabhart's latest historical novel is a tour de force. The vividly rendered town of Springfield and its citizens immerse readers in a story of courage, betrayal, and honor that will stick with them long after they turn the last page.

I requested this book because the description sounded a little like Uncle Tom's Cabin which I read a long time ago. As one who loves to hear about the abolition of slavery, this book brought other such stories back to mind.

Louis finds Adria at the height of her childhood trauma. As a seven year old, she escaped the death clutches of cholera herself, but was left an orphan. Louis and Matilda were slaves, but they too also escaped cholera and were left to run the hotel when the owner fled. Louis has a memory for faces and takes on the grief-ridden task of burying those who died of the plague. Aunt Tilda and Louis do their best to provide for Adria, but eventually come to the conclusion that racial barriers are still too strong.

Ruth Harmon has her own story in this book. Her husband, the school teacher, dies from cholera and she is left mourning. However, she's asked to step into her husband's shoes and give educational guidance to the town's children. And in the next weeks and months that follow, she's asked by Adria herself to become family to her.

I love the way Louis and Aunt Tilda teach Adria about Jesus, death, and life. It's gentle, but it's real because they've all faced hardship and trauma together. Ruth didn't really know how to be a mother, and perhaps Adria grew up differently than the average family, but they had one another and they made it work. The story fast forwards 12 years in chapter 8 and Adria is making the important decision about marriage. But the death of George Sanderson, the hotel owner, brings life changes to them all once again. Adria is left wondering she can do and how to pursue her passion for the abolition of slavery. Ruth has her own questions about romance, and Louis is a slave in a chaotic and changing time.

This is the fictional story of a real account. Louis dug graves to bury the victims of cholera, and in the end...well, you'll have to read the story and author's note for the conclusion. ;) It's a happily ever after ending, but all the characters learn that weeping endures for a night, but joy comes in the morning.

*Book has been provided courtesy of Baker Publishing Group and Graf-Martin Communications, Inc.
Posted by Kaleigh Stroink at 11/01/2018