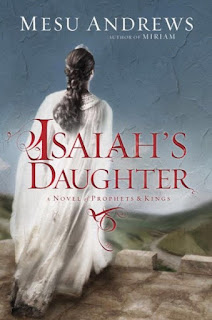 From Amazon:
In this epic Biblical narrative, ideal for fans of The Bible miniseries, a young woman taken into the prophet Isaiah's household rises to capture the heart of the future king.

Isaiah adopts Ishma, giving her a new name--Zibah, delight of the Lord--thereby ensuring her royal pedigree. Ishma came to the prophet's home, devastated after watching her family destroyed and living as a captive. But as the years pass, Zibah's lively spirit wins Prince Hezekiah's favor, a boy determined to rebuild the kingdom his father has nearly destroyed. But loving this man will awake in her all the fears and pain of her past and she must turn to the only One who can give life, calm her fears, and deliver a nation.

From the first few words of this book, the reader enters the whirlwind of activity that might not be too inaccurate from the Israelites' long past. Andrews relates the story of Ishma. Perhaps she was named for the past, present, or future desolation that she and the nation of Israel experienced, for that is what Ishma means--"desolation". And yet, though her new master, Isaiah, gives her a new name meaning "delight of the Lord", she still struggles with the desolation inside herself and throughout her nation.

There are so many things to love about this book...and to learn as well. I love Yaira's unwavering commitment to the Lord's will through her life, despite the tragic events. I love Hezi's devotion to God even when he lived in the center of wicked palace life. I love Isaiah’s perseverance and courage to prophecy even though it might take his life. And Ishma…I love her for who she is and who she becomes.

Andrews weaves an incredible story surrounding the period of King Ahaz and King Hezekiah, while creating fictional characters to emphasize the humanity of men and the awesomeness of God. I’m still not quite sure I appreciated the portrayal of Isaiah as a righteous prophet yet often misinterpreting prophecies based on his opinion, but I suppose some things are an author’s liberty. ;) And at times I thought Queen Abijah was a bit too fictional, but in no way did either of these elements detract from the message of this book. I loved Isaiah's prophecy because it showed how people could misinterpret God's word at that time, but also it showed how greatly they longed for the coming Messiah and how they lived in the expectation of that hope.

The history that was well-written and included throughout the chapters. Each chapters opens with a passage of Scripture—often from Isaiah and it’s amazing to see how some of the culture and Jewish history would be present in such scenes. Often we read our Bibles with our 21st century mindset and because we know the stories so well, we forget the nation of Israel and its customs and its people. What they wore, how they lived, what they ate and sold, and what they did for work. And sometimes we even forget that they had feelings too. They were fearful for their future, being surrounded by enemies, receiving warnings and prophecies that were uncertain and not always able to be interpreted right away. They had to wait too. They suffered persecution and judgment and yet in the end still remained the beloved people of God. Hephzibah’s title reminds Isaiah and the king (and yes, herself) that God does turn mourning into gladness, and that, after the darkest of nights, joy comes at dawn.
Posted by Kaleigh Stroink at 3/17/2018