A Lost Castle by Kristy Cambron 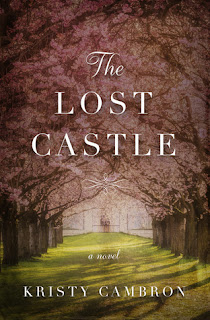 From Amazon:
Broken-down walls and crumbling stones seemed to possess a secret language all their own.

What stories would they tell, if she finally listened?

Ellie Carver arrives at her grandmother’s bedside expecting to find her silently slipping away. Instead, the beloved woman begins speaking. Of a secret past and castle ruins forgotten by time. Of a hidden chapel that served as a rendezvous for the French Resistance in World War II. Of lost love and deep regret . . .

Each piece that unlocks the story seems to unlock part of Ellie too—where she came from and who she is becoming. But her grandmother is quickly disappearing into the shadows of Alzheimer’s and Ellie must act fast if she wants to uncover the truth of her family’s history. Drawn by the mystery surrounding The Sleeping Beauty—a castle so named for Charles Perrault’s beloved fairy tale—Ellie embarks on a journey to France’s Loire Valley in hopes that she can unearth its secrets before time silences them forever.

Bridging the past to the present in three time periods—the French Revolution, World War II, and present day—The Lost Castle is a story of loves won and lost, of battles waged in the hearts of men, and of an enchanted castle that stood witness to it all, inspiring a legacy of faith through the generations.

This book was an interesting one. I was excited to receive it because the cover was just beautiful and I had seen social media posts about it in several places.

First off, I love how Kristy begins the Prologue with Isaiah 58:12. Just a special passage of mine that is meant to bring hope to the Israelites in a desperate time.

I appreciate the effort Cambron went into in order to write a detailed story spanning the French Revolution, WWII, and present day. She combines several different eras and weaves them all into one story with all the loose ends tied up. I love Aveline's character. She's brought up royally, but doesn't allow that to impede her courtesy and love for others, along with practicality for herself. Robert's relationship with her is one that I love as well. He cares for her when she comes into danger and treats her respectfully, allowing to find her own interests and desires whether or not they coincide with his. Quinn, also, with Ellie, causes her to think, yet enables her to grow her trust of him in small and practical ways. Really, I think the world needs a few more men like Cambron creates in her stories.

I wasn't sure exactly how to write a review of this book because for some reason I didn't connect well with it. I've read both her books in the Hidden Masterpiece series and I loved them and the characters, plot, and depth resonated with me deeply. I feel like Cambron tried to cover too much history in a short amount of time and it didn't come out quite so deeply. It was a bit disappointing as I wanted to love this book, and I still haven't detailed all the reasons why I didn't quite love it (maybe some of it was the French language and lifestyle :P), but I'm happy to say that it's not because of her writing style or character development. She writes with high quality and her characters are well done. I can say that of each of the three books I've read by her. And if you love good romances and history, this is one of many books for you.


*I received a complimentary copy of this book from Thomas Nelson through NetGalley. Opinions expressed in this review are completely my own.
Posted by Kaleigh Stroink at 4/06/2018