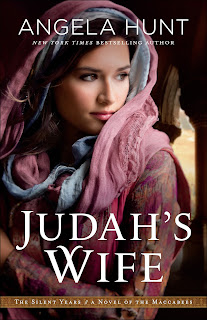 From Amazon:
Seeking peace and safety after a hard childhood, Leah marries Judah, a strong and gentle man, and for the first time in her life Leah believes she can rest easily. But the land is ruled by Antiochus IV, descended from one of Alexander the Great's generals, and when he issues a decree that all Jews are to conform to Syrian laws upon pain of death, devout Jews risk everything to follow the law of Moses.

Judah's father resists the decree, igniting a war that will cost him his life. But before dying, he commands his son to pick up his sword and continue the fight--or bear responsibility for the obliteration of the land of Judah. Leah, who wants nothing but peace, struggles with her husband's decision--what kind of God would destroy the peace she has sought for so long?

The miraculous story of the courageous Maccabees is told through the eyes of Judah's wife, who learns that love requires courage . . . and sacrifice.

Continuing in my search for good historical fiction, I found another amazing book by Angela Hunt. The first book I read and reviewed was the first in the Silent Year series called Egypt’s Sister, and because of her vivid writing and descriptive characters there are certain points of the story that still stick in my mind. Judah’s Wife is no different, and I was thrilled to receive it as a review copy.

The Silent Years are, well, silent, and we don’t know much about them, but Hunt takes the life of Judah Maccabees and surrounds it with courage, passion, and sacrifice through the eyes of his wife and himself. While many of the female characters were fictional (in the sense that we don’t know anything about them), Leah was a beautiful picture of redemption and hope throughout the story. Raised in an abusive household, Leah’s mental and spiritual thoughts are twisted by a father who beats his wife but appears righteous in public. Leah also struggles to understand her role as a wife since all she saw in her home was her mother submitting to the abuse from her father.

Through the turmoil and political unrest in Judea and surrounding Israel, Leah desperately wants peace, and finally finds some measure of security and rest in her marriage. But that is about to change. Hunt write this book alternating points of views for each chapter between Leah and Judah, and I love reading the different perspectives. Judah isn’t a particularly ambitious man in the sense of leading a nation of men, but he’s courageous and is willing to die for his faith. He doesn’t seek a fight, but yet will give his all when HaShem’s glory is blasphemed. I also love that once Judah finds his purpose, he waits for God’s moving in his heart before he acts, and nothing dissuades him from doing HaShem’s will.

I’m guessing that the research and history necessary to flesh out Judah and Leah’s life must have been fascination. I knew the name of Judah Maccabees and the political unrest during that time was somewhat familiar to me, but to finally see a glimpse inside a potential family’s life was so insightful.

Angela Hunt writes for older minds and includes war and romance scenes. They are real (and war includes death), but neither are overdone. I appreciate finally seeing good romance between husband and wife, as I have always been uncomfortable reading intimate scenes between non-married couples or just flirtatious behavior in general.

This book is powerful as it recounts Hebrew history as it intertwines with the struggles and battles that it will always face. Judah faces his calling and gives his all for it and Leah finds purpose in a God who loves her perfectly. A well written book with detailed history among fiction and non-fictional characters. Can't wait to read more from Angela Hunt!

*Book has been provided courtesy of Baker Publishing Group and Graf-Martin Communications, Inc.
Posted by Kaleigh Stroink at 2/28/2018