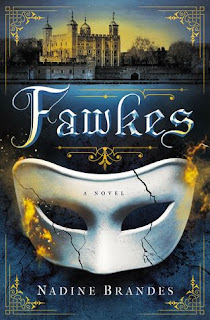 From Amazon:
Silent wars leave the most carnage. The wars that are never declared, but are carried out in dark alleys with masks and hidden knives. Wars where color power alters the natural rhythm of 17th century London. And when the king calls for peace, no one listens until he finally calls for death.

But what if death finds him first?

Keepers think the Igniters caused the plague. Igniters think the Keepers did it. But all Thomas knows is that the Stone Plague infecting his eye is spreading. And if he doesn’t do something soon, he’ll be a lifeless statue. So when his Keeper father, Guy Fawkes, invites him to join the Gunpowder Plot—claiming it will put an end to the plague—Thomas is in.

The plan: use 36 barrels of gunpowder to blow up the Igniter King.

The problem: Doing so will destroy the family of the girl Thomas loves. But backing out of the plot will send his father and the other plotters to the gallows. To save one, Thomas will lose the other.

No matter Thomas’s choice, one thing is clear: once the decision is made and the color masks have been put on, there’s no turning back.

Ever since I heard about Nadine Brandes and the Out of Time series, I have wanted to read them. Well, I haven't read that trilogy yet because some country's (*coughCanadacough*) shipping is ridiculous, but I just got a review copy of Fawkes--Nadine's latest novel. And, oh my goodness, it's beautiful. The cover is captivating and intriguing, and I really didn't read anything about the book before plunging in. After reading the book, I just sat back and marveled at the way Nadine placed history and fantasy in the same book and how skillfully they were woven together. And yes, there is a deeper meaning to this story, than just the Keeper-Igniter war.

Thomas character was special. He struggles with the Stone Plague, but even more so with his purpose, mission, and loyalties. He seeks to love his father and be worthy of him even though he's been hurt badly by him. And when he finally makes his own decisions about right and wrong, he realizes that it may cost some people their lives.

I love the idea of color masks as a way of showing people's unique gifts and talents. The characters of England each have a color power, granted to them only by the color test and by a individual mask created and formed by a parent. The child is raised to learn to mold with his mask and use the colors he/she has bonded with to bring peace (and war where necessary) in the world. Thomas doesn't have a mask yet, and to gain one will take more courage, risk, and sacrifice than he imagined. But he has the strange advice of the White light, along with Emma's counsel and his father's experience to guide him.

I love the relationship between Thomas and Emma. It's definitely not forced and it grows and strengthens because of challenges. And in the end, both Thomas and Emma see that being vulnerable and honest with each other leads to love in a way they didn't expect.

This book is packed with meaning for the Christian, and is captivating and full of history. But looking back at history, we can also learn something for today and for our futures.

Thank you, Nadine! Now I really want to read the Out of Time series. ;)