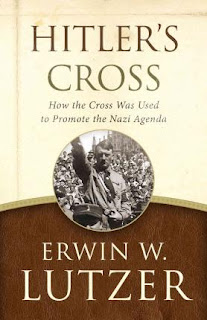 Back Cover:
"Dein Reich komme," Hitler prayed publicly--"Thy Kingdom come." But to whose kingdom was he referring?

When Germany truly needed a savior, Adolf Hitler falsely stepped in. He directed his countrymen to a cross, but he bent and hammered the true cross into a horrific substitute: a swastika.

Where was the church through all of this? With a few exceptions, the German church looked away while Hitler inflicted his final solution upon the Jews. Hitler's Cross is a chilling historical account of what happens when evil meets a silent, shrinking church, and an intriguing and convicting expose of modern America's own hidden crosses.


My Twitter feed just happens to be a place where ministry updates and book lover thoughts collide, and when I saw several people raving about this book, I decided to review it next. I was pretty sure I would love Lutzer's style of writing, and I wasn't disappointed. Like Rescuing the Gospel, Lutzer writes with clarity and detail, yet in a conversational style.

This year I have been drawn to the history during World War 2 and have already read several historical novels of the time period. While much of the history is tragic, I enjoy the life reminders and accounts of people who were willing to stand up for what they believed despite the cost.

Hitler's Cross is a little deeper though. Many people believe the Holocaust never happened. Others shake their heads and wonder what kind of man Hitler must have been to carry out such an awful role. But despite some obviously glaring differences, Hitler was an average man. He believed himself a Christian, he was very "spiritual", and he was deeply involved with the public, even before his rise to power. He knew people and he knew politics, and he used these both (if somewhat unfairly) to place himself on the "throne" when the people needed him most. The conflict of church and state, the Treaty of Versailles, and general instability of the nation, gave Hitler the abililty to comfort the people and demonstrate his leadership. I appreciated understanding how Hitler used religion and spirituality in his life. I do not doubt that he was involved in Satanic and demonic activity, but hearing it from Lutzer clearly demonstrated that the terms "Christian" and "spirituality" mean many things to people.

Hitler didn't rely simply on his own mind and thoughts to bring a massive change to his country. There were psychologists, speakers, and authors that Hitler drew from or promoted (with or without knowing it). Men such as Karl Marx, Georg Hegel, Friedrich Nietzsche, and Fyodor Dostoyevsky profoundly shaped the thinking of Hitler.

I loved Lutzer's thread of Providence through this whole book. Despite the horrific deeds of Hitler, we see God (or as he believes "Fate") leading the events of history and being specifically involved in Hitler's life. Lutzer deals with the role of Fate and God in this book and clearly explains the terms and how each were demonstrated in history. Lutzer unpacks the anit-semitism of the time period, and tackles the topic of who was in charge: God or Hitler. This book is full of interesting history, along with the stories of Deitrich Bonhoeffer and Martin Niemoller (this man's testimony is so encouraging--never heard of him until this book), and quotes from various other men and women who decided to speak out for those who couldn't.  I also appreciated learning about the German Christians. They were a group who sat on the fence regarding issues much of the time. Some kept preaching but did it secretly, while others decided to go along with Hitler's demands so they wouldn't be arrested. But some, not under the label of German Christians, decided to preach the Gospel and suffer if necessary, because God had called them to defend the poor and outcasts of society.

As Lutzer says, "Suffering gives the Cross its most enduring witness." Pick up this book if you get a chance, and thank God for the churches and invidividuals who decided to live fully while preparing to die.


*I received this book free from Moody Publishers. All opinions expressed are my own.