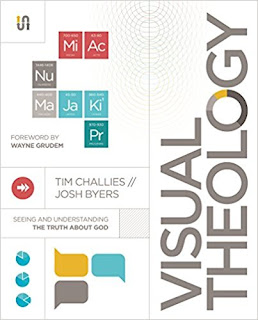 From Amazon:
We live in a visual culture. Today, people increasingly rely upon visuals to help them understand new and difficult concepts. The rise and stunning popularity of the Internet infographic has given us a new way in which to convey data, concepts and ideas.

But the visual portrayal of truth is not a novel idea. Indeed, God himself used visuals to teach truth to his people. The tabernacle of the Old Testament was a visual representation of man’s distance from God and God’s condescension to his people. Each part of the tabernacle was meant to display something of man’s treason against God and God’s kind response. Likewise, the sacraments of the New Testament are visual representations of man’s sin and God’s response. Even the cross was both reality and a visual demonstration.

As teachers and lovers of sound theology, Challies and Byers have a deep desire to convey the concepts and principles of systematic theology in a fresh, beautiful and informative way. In this book, they have made the deepest truths of the Bible accessible in a way that can be seen and understood by a visual generation.

I purchased this book shortly after it was published, and I began reading it about two months later. I finished reading it at the beginning of April, and it was a great encouragement to me. I have followed Tim Challies blog for several years now, and have learned much from his simple explanation of doctrines or applications of life truths. And I'm pleased to support a Canadian pastor. ;)

This book covers the main aspects of the Christian life in how he relates to God and others. While this isn't an exhaustive doctrinal statement on evangelical beliefs, the truths it unpacks are fundamental to a healthy Christian walk with God. Challies and Byers lead you through topics such as growing close to Christ, understanding His work, becoming like Him, and then living for Christ. Each section then expands into several chapters on important subtopics: Gospel, Identity, Doctrine, Vocation, Stewardship, Relationships, etc.

A couple other reviewers were disappointed by the amount of visuals/infographics in Visual Theology, and while I went into the book knowing others opinions, I wasn't disappointed at all. I am a visual person, but I tend to focus more on what's written than on pictures. So for me, I think the frequent visuals captured the topics, subtopics, and definitions well. I love how they would break down the chapters into a visual that brought all the minor topics into once place, demonstrating how they were related. Check out some of the visuals HERE. So far my favorite is the identity in Christ visual, but I loved the infographics in the four acts of the drama of God. Those were especially interesting, as I hadn't previously thought of God's work in peoples lives and the world in the way Challies and Byers presented it. I also enjoyed reading the marginal notes which included resources for further study.

Even after reading through this book, I find some of the visuals popping into my head as I study, work, read, or listen to lectures and sermons. This is a great book for families...one that you can leave lying around, and even if you don't have time to sit down and read it, the visuals will encompass some of the main truths of life and encourage and exhort you to view theology in an accurate way. It's a book that connects the dots between theology and practical living. The bright colors and fresh reminders of already known truths were encouraging. Grateful to have a copy make its home on my bookshelf.
Posted by Kaleigh Stroink at 4/24/2017