Between Heaven and the Real World 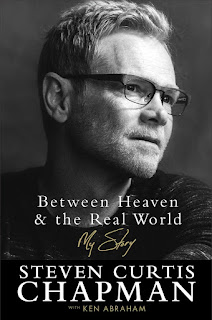 Back Cover:
For decades, Steven Curtis Chapman's music and message have brought hope and inspiration to millions . Now, for the first time, Steven openly shares the experiences that have shaped him, his faith, his family, and his music in a life that has included incredible highs and faith-shaking lows.

Discover the stories behind some of his best-loved songs. Walk with him as he and his wife, Mary Beth, navigate the joys and trials of marriage and family. Cheer for his return to the stage after doubting that he culd ever sing again. and SEE God in the aftermath of the tragic death of their five-year-old daughter Maria.

Poignant, gut-wrenchingly honest, yet always hopeful, Steven offers no sugary solutions to life's toughest questions. Yet out of the brokenness, he continues to trust God to one day fix what is unfixable in the space between heaven and the real world.

I don't remember the first time that I heard Steven Curtis Chapman's music, but I remember that one of the first few songs I heard was "Glorious Unfolding". I remember that the words rang deeply with what ever Christian hopes for--a "happily ever after" ending. And while no one ever experiences that completely, there is a taste of it here on earth.  Chapman sung that while our story is important, it's only a shadow of the glory that is to come. He gives hope for the current "story" we're living, but points to the future hope of a new heaven and new earth. Listening now to his music, I recall that there wasn't anything specifically impressive about his voice, but it was the message of truth in each line of his songs that remained with me. "Take Another Step" and "Finish What He Started" were two others I remember because of the biblical truth and relevance to life's paths. God's promises in keeping us secure and giving us strength, but also our responsibility to keep going even when we feel like we can't.

So after knowing that Chapman produced theologically rich songs, I checked out his book to review after it was published. I didn't know much about his or his family's life, but reading through his story, I think I know a little more. ;) He begins with his own childhood family setting and allows us to enter in to his home, his family, his insecurities, and his character. I appreciated his honesty and willingness to share the influence of the good and bad teachings from his parents. I firmly believe that how we view God often relates back to how our parents related to us, and a little of that was shown in his book as well. Chapman has struggled with his voice all of his life; sometimes to the point of not knowing if he could continue. He wasn't blessed with the audience captivating voice, as some are. Rather his gifting was in quickly producing songs that related to his audiences and often times resulted from his own life struggles and joys. And this music is what gives healing to his family and his audiences.

His journey into recording and entering the music realm was also one of great difficulty, but he did not give up. He sought God and his family's opinions in order to know if he should continue to pursue his calling. This book may be emotionally hard for some to read. It's deep, but it's a rich deep. I loved the counseling aspects to it. After the death of their little girl, Curtis and Mary Beth (his wife) chose to be open about their pain and confusion to those around them. They struggled with anger and chronic depression but chose to seek out healing and help consistently. He highlights some of the questions, the arguments, and counseling sessions that they go through, and how it brought them closer to God, and closer to understanding one another.  And how it resulted (for Chapman) in several songs and albums that still reach to the public today.

While I'm not in the challenge of the music spotlight, and while I may not participate in all their lifestyle choices, I was challenged to see a man and his family who were humble enough to live vulnerably through their weaknesses. He interacted with hundreds of music professionals and top recording artists. He collaborated with other singers and spoke to the thousands who listen to his music. He didn't hide his pain or joys from his audiences, and he continually cried out to God when life brought challenges. One of his most recent songs was written for the movie "War Room", and it's called "Warrior". His words are powerful, and they have inspired people to live strong, but weak, lives in Jesus--ever pressing on to know Christ more while we live between heaven and the real world.

*Book has been provided courtesy of Baker Publishing Group and Graf-Martin Communications, Inc.
Posted by Kaleigh Stroink at 5/03/2017

Email ThisBlogThis!Share to TwitterShare to FacebookShare to Pinterest
Labels: 2017, Baker Books, Between Heaven and the Real World, Nuts About Books, Steven Curtis Chapman