Intended for Evil by Les Sillars 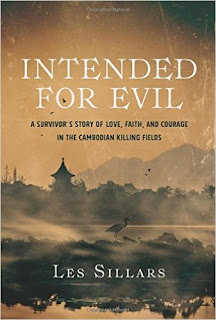 How do you survive when everything you hold dear has been ripped away?
This is the question Radha Manickam asks himself during the three years and nine months he spends under the merciless rule of the Khmer Rouge. When Khmer Rouge forces take the city of Phnom Penh in 1975, Radha is a new Christian, passionate about living out his faith. Over the next years of his life, 1.7 million of his fellow Cambodians--including most of his own family--will perish due to starvation, disease, and unthinkable violence.
As he strives to hold tight to his faith, he finds that in the midst of hell on earth God has not forgotten him. Forced by the communist regime to marry a woman he doesn't know, Radha discovers that God has a plan for his life that he never would have imagined.
This compelling true story of survival against incredible odds shows that out of war, fear, despair, and betrayal, God can bring hope, faith, courage, and restoration.

The Khmer Rouge, a Communist revolution, was an event in history that I had never heard of. Until this book. I cannot attest to the historical accuracy or interpretation, as I have not studied it out, but I loved learning about the history through Radha Manickam's story. I can definitely see why this story was published.

The eldest of seven children, Radha grew up in a normal, moderately wealthy Cambodian home. The Khmer ethnic group populated most of Cambodia, and the rest were typically Chinese or Vietnamese. Civil war broke out in 1970 and devasted the nations and large cities, along with sometimes conflicting and tense relations with the American forces. Following this war scene and throughout the following years, we live Radha's life with him as he becomes a new Christian and survives the bloody revolution.

This book contains much history, both politically and geographically, and sometimes I found it hard to follow if I read too quickly, but nonetheless it was very interesting. Because of the nature of this revolution, there are specific details given which would lead to a more mature audience. While I don't advocate or enjoy violence, I do think we do well to understand what has taken place in the past. Though Radha's salvation is detailed and frequent episodes regarding his faith and struggles are written, I would have liked to hear more of Radha's faith throughout the story, and how it molded him into the person he became.

Radha loses most of his family to starvation or the violence of the Khmer Rouge, and he's forced to make life-changing decisions as a young man. Terror and death were common elements of the revolution, and the tyrannical dictatorship soon enslaved families and forced them to work in the rice fields. Radha's faith was tested many times. The Khmer Rouge determined everything about people's lives--work, family, marriage--and we also hear of Radha's marriage, a difficult union at first because no one trusted anyone.

Later on in the US, Radha and Samen (his wife) struggle knowing that their nation is still suffering under the effects of the revolution. Radha later returns to Cambodia and sees the devastation of his homeland and works through the horrifying memories. This book isn't a light one at all, but it tells the story of one (among many) man who suffered through the "killing fields of Cambodia" and lived to tell about it. It's a story worth reading, not only for the history, but also to remember our fellow believers who suffered and found grace even in their unspeakable pain.


*I received this book free from the publishers. The opinions expressed are my own. I was not required to write a positive review.
Posted by Kaleigh Stroink at 12/06/2016