Speaking of Homosexuality by Joe Dallas 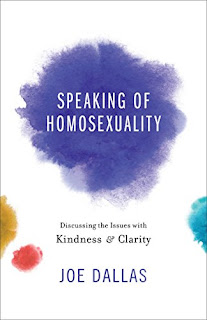 From Amazon:
Homosexuality and gay marriage stand among perhaps the greatest defining cultural battles of our age. There's no escaping the inevitable conversations--so how does a Christian respond with love and biblical truth without adding fuel to the fire?

Drawing on nearly thirty years of counseling people struggling with homosexuality, former gay activist Joe Dallas takes readers through virtually every argument they are likely to hear in favor of normalizing homosexuality. He helps readers understand the views of LGBT people they may know and respond with clarity, confidence, and compassion. He shows the most effective ways to engage the subject on social media and in everyday encounters with guidelines for talking points, dialogue, approach, and tone, and even provides sample dialogue.

Anyone who has been searching for ways to have productive, loving conversations surrounding this critical topic will find this incredible resource a must-have.

Currently, there are no reviews of this book on Amazon, so I'm guessing that not many people chose it for their monthly review book. However, when I saw it released, I picked it up because the topic of homosexuality and Christianity is a vital and current topic. Many Christians struggle to answer their own or others questions regarding the topic. We don't want to be seen as "homophobic", but nor do we want to compromised our standards, or maybe we just don't understand why there is such a big fuss. After all, it doesn't seem to be a "salvation" issue that we need to divide over.

Joe Dallas begins his book by explaining the context of the culture we live in along with its presumptions. Because we assume things about homosexuals or the homosexual lifestye that aren't always true. And they assume things about those who don't agree with them as well. He then defines some terms which I found extremely helpful because I hadn't heard of them before. Basically he describes how each generation has thought about homosexuality. The Militants are convinced that homosexuality is normal and that those who disagree need to be silenced, while most people would fall under the description of Mainstream: the average person with whom we have more in common than we realize. Millenials are different in that they are the first generation to be mostly prohomosexual. And to describe things further, there is the Traditionalist and Revisionist point of view for Christians. Traditionalists tend to view Scripture as saying that homosexuality is a sin, while Revisionists tend to hold to the position that Scripture has been misunderstood on this matter and cultural reformation is needed.

Dallas then goes on to give several important reminders on how we're to engage conversation and participate in discussions. I love how each chapter ends with 10 talking points from that chapter. These provide a short outline of the chapter content and provide quick points to remember when discussion homosexual issues with others. Chapters 4-13 are the chapters which take arguments and provide answers for them from Scripture. I appreciated Dallas' concise way of answering arguments and giving specific passages, along with common logic to draw readers to the conclusion. He deals with topics such as being "born gay", same-sex marriage, homophobia, hypocrisy, and harm, gay Christians, Levitical passages and the "gay Christian", and homosexuality in the New Testament. Dallas covers all the basis.

Reading this book provided much thought, as I saw how many assumptions the average person has about homosexuality, along with some that I myself also had. I bracketed many paragraphs which highlight truths of Scripture in a practical way, and I appreciated Dallas' boldness. While he is honest, he's kind and forgiving in his writing, and I think many people could read this book even though they might disagree. Dallas' is specifically debating the Revisionist point of view in his arguments, and I think he does well in his layout of the book. For each argument he presents 3-4 responses and details his answers.

So glad I picked up this book. While I still have the last two chapters to finish off, I'm glad I picked up this copy. A much needed reminder of truth in the midst of a changing culture. Dallas balances the line between shunning those who practice the homosexual lifestyle (or merely support it), but yet not condoning behavior that is specifically expressed as sin in Scripture. It's a tough place to be today. But let's remember that they who identify as part of the LGBT lifestyle need to be treated with Love, Grace, and Biblical Truth (my new acronym ;). To converse and disciple people with same-sex attraction or even with those actively practicing that lifestyle, it will be a hard ride, but by God's grace it will be a life worth knowing if we are pointing them to Jesus by our love for them.

The righteness or wrongness of a thing is not determined by its changeableness. Some tendancies may never change, or may never change completely. That doesn't justify giving in to them. And if therapy cannot erase them, that doesn't discredit therapy.
---
Everyone has, at some time, been firmly convinced of something only to later find they had it all wrong.
---
...what we're facing in today's church is not unique. Christ's body has always included people who repented of homosexual behavior and faithfully stwarded their bodies to the end. But it has no doubt also included those who decided to indulge what they initially resisted.
---
...stories...remind us that such strugglers [Gay Christians] often endure the slings and arrows of fellow believers who make crass jokes about homosexuals without realizing whom they may be wounding. And they remind us of the profound grief in facing the possibility of life without sexual fulfillment if what would fulfill you most is forbidden and difficult even to discuss.
---
Truth would be a lot easier, after all, if it wasn't accompanied by love. But it is, binding our hearts hostage to another person's experience...All because we're bonded in love to those who may or may not join us in eternity...to those who choose intimate obedience or continue to rebel. Our hearts ride with them as they analyze, wrestle, rationalize, and hopefully, sooner or later say yes to God. But we also risk accompanying them emotionally into the grief of no.


*I received this book free from the publishers. The opinions expressed are my own. I was not required to write a positive review.