When Others Shuddered by Jamie Janosz 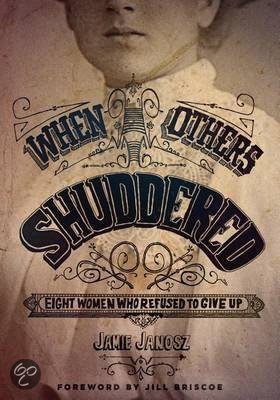 Travel back in time to turn-of-the-century America. Skirts trailed the floor, hats were a must, and corsets were commonplace. People traveled by horse and carriage, locomotive, or ship. The first skyscrapers were built. The World's Fair arrived in Chicago.

Life was swiftly changing in the United States, but for most, it was also difficult. Men and women flooded the cities in a desperate search for work. Former slaves fled north seeking freedom and education. Crime began to rise as brothels and saloons became commonplace in American cities.

It was in this world that Fanny Crosby, Mary McLeod Bethune, Nettie McCormick, Sarah Dunn Clarke, Emma Dryer, Virginia Asher, Evangeline Booth, and Amanda Berry Smith lived and worked and served. They were ordinary women called to serve God. They followed His leading, risking their own safety and reputation. In doing so, they changed the world forever.

The stories of these eight historic, faithful women will change your life as well as you see what God can do through the willing hearts of ordinary women.


This book was an encouraging read. Though I read it on and off through a busy work season, it was refreshing to come back to stories of some of the women of history who stood fast "when others shuddered". I had never heard about Jamie Janosz but I was entrigued by the life overviews of women who lived during an ever-changing society.

Stories such as Fanny Crosby's and Emma Dryer's demonstrated the unwavering faith in God despite personal loss. Sarah Clarke and Evangeline Booth showed their unfailing trust in their Savior as He provided for their financial needs. And I loved learned about the lives of Amanda Smith and Virginia Asher--names not commonly heard throughout history. Janosz also includes short chapters about education, missions, and politics as they affected and related to women in these challenging times.

Unlike others around them, despite personal, financial, material, or relational loss, these women refused to give up. While each women has only three chapters written about her, I appreciate how Janosz focuses on personal and spiritual growth in each of their lives. You don't get all the tiny details of the womens' lives, but you see enough to understand how women of different social, spiritual, and financial backgrounds can all relate and build faith in the same God. These women played important parts in history, and many of them were the encouragers of the evangelists and future "great men" of church history. They weren't faultless, and in some cases I would disagree with their choices of lifestyles, but they did have a Savior in common and they followed His leading no matter what those around them said. They were willing to give up personal comfort for the sake of winning others to Jesus. Very glad I requested this book. :)


*I received this book free from the publishers. The opinions expressed are my own. I was not required to write a positive review.
Posted by Kaleigh Stroink at 12/27/2016

Email ThisBlogThis!Share to TwitterShare to FacebookShare to Pinterest
Labels: 2016, Jamie Janosz, Moody Publishers, When Others Shuddered