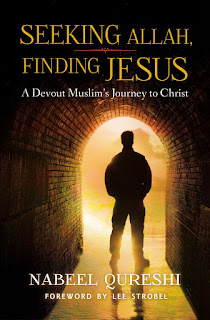 Providing an intimate window into a loving Muslim home, Qureshi shares how he developed a passion for Islam before discovering, almost against his will, evidence that Jesus rose from the dead and claimed to be God. Unable to deny the arguments but not wanting to deny his family, Qureshi struggled with an inner turmoil that will challenge Christians, Muslims, and all those who are interested in the world’s greatest religions.

Engaging and thought-provoking, Seeking Allah, Finding Jesus tells a powerful story of the clash between Islam and Christianity in one man’s heart and of the peace he eventually found in Jesus.

I heard about this book from social media and friends for a long time until a special friend gave it to me for my birthday. Before I read it, however, I was saddened to hear through social media that Mr. Qureshi had contracted cancer and was now going through treatment. Because of his story and his faith, I believe there are many, many believers praying for his recovery and strength through this process.

This book tells the story of Nabeel Qureshi and his journey towards saving faith in Christ Jesus. Growing up in a devout Muslim home, his desire for spiritual knowledge enabled him to learn how to defend the Muslim faith quickly. His parents were faithful Muslim's as well, and Qureshi takes the time to give us exact convsersations from his family life. I love how he describes relationships and background history, as I think many today have one view of Muslims--that of terrorism and violence. However, not all Muslim families are like that. Throughout the book Qureshi offers definitions of common Muslim practices and describes in detail some of the rituals involved in that religion. This leads for a clearer picture of everyday Muslim life and it draws the reader closer to the Qureshi family.

Qureshi's questions about his faith soon lead him on a search that would likely end in a different way than he first expected. I appreciated how he describes the differences between Muslim faith and Christianity, as well as the struggles he had in relating to the postmodernism of today's age. The terrorist attack on 9/11 also brought increased risk for a Muslim family living in the Western world. However, at school Nabeel's friendship with David Wood will lead to an intense searching of his faith and that of the Christian believers. I love how this friendship is portrayed and how it plays out in the book. David was a faithful Christian, and yet he took much of his life at school and devoted it to Nabeel in order to defend Christianity and give Qureshi a reason to question his own faith. Though they were two men from differing backgrounds and faiths, they were like brothers to one another and their friendship withstood the test of time. David and Nabeel's friendship is my favorite part of this story. They learned to respect one another (and tease one another) and demonstrate wisdom in interacting with each other about their own religions, and David waited patiently to see Qureshi surrender to Christ. [Later on the duo find out about a mutual friendship they had...with a Buddhist, and this makes for even more interesting conversation. :)]

I empathized with Qureshi as he began to search out his own faith and see the horror of Muhammad's life and the gaps missing in his faith, but ultimately this led him to a turning point in his life. He studied the Bible as he learned the Koran, and when one studies the Bible with a willing, open heart, amazing things can happen. This is a book I highly recommend. And I think Mr. Qureshi just released a new book entitled No God But One: Allah or Jesus, which I'm keeping my eye on as well.