The Curse of Misty Wayfair by Jaime Jo Wright 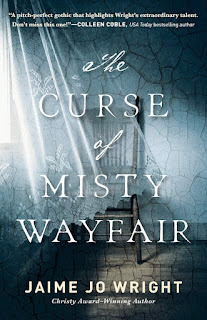 From Amazon:
Left at an orphanage as a child, Thea Reed vowed to find her mother someday. Now grown, her search takes her to Pleasant Valley, Wisconsin, in 1908. When clues lead her to a mental asylum, Thea uses her experience as a post-mortem photographer to gain access and assist groundskeeper Simeon Coyle in photographing the patients and uncovering the secrets within. However, she never expected her personal quest would reawaken the legend of Misty Wayfair, a murdered woman who allegedly haunts the area and whose appearance portends death.

A century later, Heidi Lane receives a troubling letter from her mother--who is battling dementia--compelling her to travel to Pleasant Valley for answers to her own questions of identity. When she catches sight of a ghostly woman who haunts the asylum ruins in the woods, the long-standing story of Misty Wayfair returns--and with it, Heidi's fear for her own life.

As two women across time seek answers about their identities and heritage, can they overcome the threat of the mysterious curse that has them inextricably intertwined?

I hesitated long and hard before ordering a review copy of this book. I loved Jaime's previous book The House on Foster Hill and I didn't want to be disappointed. I saw that it included the idea of a ghost and used the setting of an asylum. Put those two things together and normally you'd have a book or genre that I'd tend to stay away from. But I kept seeing it on social media when it came out, and so I read up on the book and the history of it. Then a while later, I went and read reviews from others who read it. Like one review said, the ghost idea has a "perfectly logical explanation" and indeed it does.

I've been slowly and informally learning about mental illnesses over the past couple years. I see and hear of people just pushing the idea aside or of medical practices that just try to drug the problem away. I think it's an uncomfortable topic for most people because we aren't taught how to deal with it. Or sometimes people just don't think it exists. But those who suffer from even the more "minor" mental struggles such as anxiety or depression could tell you just how crippling it can be in the best of moments. Jaime Jo Wright explores the challenges of anxiety in her character Heidi. While Heidi doesn't know she has a story of her own that she's not aware of, she knows her mother's failing health (dementia) is bringing some things to light. Her new journey will teach her what true faith is--finding identity in her Designer and allowing others to help her when her efforts can go no further.

Thea has her own challenges as well. While not necessarily the added burden of a mental illness, she indeed is harassed with questions of her past, since she was abandoned by her mother as a young child. As a photographer, she finds security and a sense of direction in an unexpected person, Simeon Coyle. Thea has a rough start finding business, requiring her to take unconventional methods to develop her photographs, but Simeon shows her a better way to capture the souls of the asylum--to remember those who are sometimes intentionally unremembered. Mr. and Mrs. Amos show her the gentleness and caring of true faith.

Pleasant Valley is where Heidi's and Thea's story collide. While not pleasant in most aspects, I loved how Wright incorporated so many aspects of life's struggles in one story. She touches on mental illness, autism, child abuse, trauma, anxiety, dementia, murder, legalistic Christianity, and family division based on Protestant and Catholic beliefs. It's a complex story with a simple faith outlined through it all. Heidi and Thea are providentially given the right people in their lives to encourage and redirect them to Jesus. Usually it comes from unexpected people in unexpected ways. Each woman comes to find healing through their challenges and pain, even when answers don't make their life easier.

I think for some, this could be an intense and somewhat scary read. While I believe that spirits do exist (both good and bad), I don't believe that they unintentionally walk the earth haunting people, so the moments that could have been unnerving were not so for me. And like the review I read previously, the ghost-like appearance has a very logical explanation. I so appreciated reading about a character struggling with anxiety because it's a common struggle today and few have the people or resources to help them walk through it. And I'm so glad another author is bringing the life of those in an asylum to life.

There were so many themes I loved in this book, but one of them was that human love and help comes from unexpected people. That faith means fixing your eyes on Jesus and the rest follows. That it's okay to find people you can trust again. It's okay to be broken and realize that you can't fix your life. But that healing comes through pushing through the pain and fear. That's it's okay to know that strength usually comes from a point of great weakness. And to never find your identity in your circumstances, but in the Creator who makes all things new.

*I was given a copy of this book from Nuts About Books for free. All opinions are my own and I was not required to write a positive review.

Email ThisBlogThis!Share to TwitterShare to FacebookShare to Pinterest
Labels: 2019, Jaime Jo Wright, Nuts About Books, The Curse of Misty Wayfair