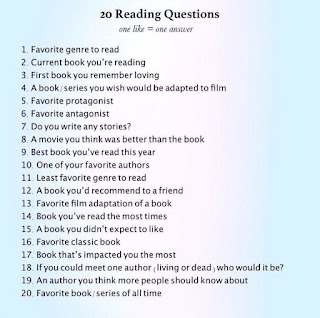 So a Twitter friend posted this last year I think, and I loved it and decided it should be a blog post. So here goes. :) (These are answers relating to fiction works. I read lots of non-fiction too.)

1. My favorite genre to read last year was fantasy/allegory and historical fiction. So far I seem to be continuing that trend. I loved finding new authors and the ones I found usually wrote from those two genres. I love historical fiction because I can learn things while having people and places come alive through past events. I love fantasy because really it's someone writing about our world and our lives, just in another place and setting.

2. Currently I'm rereading Chuck Black's Kingdom and Knights of Arrethtrae series. I'm on book 3, Kingdom's Edge, and it's every bit as good as it was the first time. (So were 1 and 2, too.) It's like an extended allegory of the Bible, including Shadow and Silent Warriors (representing demons and angels, respectively). Jewish history, and the Messiah, and daily life combined, and it is written simpler for younger people, but adults love them too.

3. The first book I remember loving was Norman the Doorman. I haven't seen any other kid read it ever and I don't even know if it's being published anymore (that makes me feel old). It's about a mouse, and it was a horizontally long book (not the regular size or square kids books). It had lots of pictures and I remember asking dad to read it over and over again. I still remember phrases from it. The first chapter books I remember loving were The Black Stallion series, and the Misty of Chincoteague series. Both about horses...animals I still love and ride today. The list of books I loved just grew from there on.

4. A book series I wish would be adapted to film would be the Kingdom/Knights of Arrethtrae series and Black's other series Wars of the Realm. A stand alone book I wish would be made into a movie would be Crowning Heaven (Emily Hayse), Pendragon's Heir (Suzannah Rowntree) or Counted Worthy (Leah E. Good).

5. This one is hard...favorite protagonist is probably Ben from War of Loyalties (Schuyler McConkey) or Reese from the Oneness series (Rachel Starr Thomson). I really can't decide. :P

6. Favorite antagonists really aren't my thing. I don't tend to like them at all and typically can't imagine them being a favorite. I'll keep thinking...

7. I wrote simple stories for school when I was little, but I'm not a story writer as such. I do remember writing a story about a dog sled team and about a rabbit who needed a friend, but I've written non-fiction and poetry in greater quantities as I've gotten older.

8. So I used to believe the Lord of the Ring movie series were better than the books. However, having read them through a second time, I have changed my mind. The books are so full of amazing quotes (so are the movies), and rereading them makes me just want to read them again. However, I will say that the Hobbit movies are better than the book (though I did enjoy the book). It's a lighter story (and it was meant to be so), but I love the deeper side of relationships and life that the movie brings out.

9. Best book this year so far, is The Return of the King (3rd book in the LOTR trilogy).

11. I'm not sure I have a least favorite genre. I usually like books from all different genres. It really depends on the author and the book, not so much the genre for me. There are some very obvious genres I would refrain from reading, but typically, I'm willing to try most stories in different settings.

12. I have way too many books that I'd recommend to friends. After all, I have six bookshelves (might be seven soon), so I'm not really sure where to start. The last book I recently loaned to a friend was Crowning Heaven. I'd also recommend War of Loyalties (Schuyler McConkey), Exile (Rachel Starr Thomson), Pendragon (Suzannah Rowntree), and A Time to Die (Nadine Brandes).

13. I haven't really watched many film adaptations of movies, and the ones I've watched recently, the book was written after the movie. However, I do love, love, love the extended edition of The Hobbit and Lord of the Rings. I also recently watched Paul, Apostle of Christ and read the book by Angela Hunt. Super well done.

14. Probably the Bible. I haven't counted, but I am quite sure that I have reread the Bible more times than I've ever read any other book. I don't often reread, though it is my goal to do it more this year.

15. Well, the books I don't expect to like are the ones I haven't read yet. I usually expect to like a book and often I do. There are few that I have read and not liked in some way. Usually that happens with non-fiction, more than fiction.

16. I'm very bad at reading classics. If Little Women and Little Men are classics, then I love them (also the movies). Same with Swiss Family Robinson. I have Emma and Pride and Prejudice on my shelf, but I haven't read them yet. My reading habits so far have consisted of reading ancient books (that nobody knows about) or brand new authors (also which nobody often knows about, it seems). But it makes an amazing platform for sharing new stories. :)

17. Different books have impacted me at different stages of life, so truly there is no one book, and often times they happened to be non-fiction works. However, Dreamlander (K.M. Weiland), War of Loyalties (Schuyler McConkey), and Renegade (Rachel Starr Thomson) have been the most influential in the last five years or so. I love the challenges of faith, and journeys of friendships in each of them. Basically I love seeing faith meet real life and how it plays out in peoples' lives.

18. Actually, I have met two authors already. One being a friend, and the other a Sunday school student of mine. :) However, I think that meeting Nadine Brandes would be amazingly fun. I love her Instagram stories (especially of baby-life), and her YouTube videos are so friendly and personable. But I'd love to meet Angela Hunt and Emily Hayse and K.M. Weiland and ask them All the Questions about why they wrote their stories.

19. I think more people should know about Rachel Starr Thomson. I can't remember where I was first introduced to her, probably social media somewhere, but the first book of each of her series is free on her website. She has a large following and also speaks at conferences and retreats and such, but everyone I mentioned her to doesn't seem to even know about her. Her insight into Scripture is amazing and she writes stories that take spiritual matters and make them tangible (or so it seems). She writes the hard stuff in ways that people would readily accept. And she has a membership for readers so you can get access to all her new books first (because why ever not?).

20. My favorite series is the Oneness Cycle by Rachel Starr Thomson. Favorite book...well, I'd have to have one for each category and genre. There's no way I could have a favorite book. However, I think most of my favorite books are mentioned in this post, so read them sometime and let me know what you think! You can also find reviews of many of them on the Alphabetized Book Reviews page.

What would be some of your answers to these 20 questions?
Posted by Kaleigh Stroink at 2/27/2019