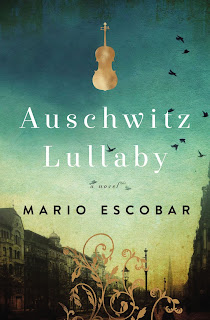 From Amazon:
Auschwitz Lullaby brings to life the story of Helene Hannemann—a woman who sacrificed everything for family and fought furiously for the children she hoped to save.

On an otherwise ordinary morning in 1943, Helene Hannemann is preparing her five children for the day when the German police arrive at her home. Helene’s worst fears come true when the police, under strict orders from the SS, demand that her children and husband, all of Romani heritage, be taken into custody. Though Helene is German and safe from the forces invading her home, she refuses to leave her family—sealing her fate in a way she never could have imagined.

After a terrifying trek across the continent, Helene and her family arrive at Auschwitz and are thrown into the chaos of the camp. Her husband, Johann, is separated from them, but Helene remains fiercely protective of her children and those around her. When the powers-that-be discover that Helene is not only a German but also a trained nurse, she is forced into service at the camp hospital, which is overseen by the notorious Dr. Mengele himself.

Helene is under no illusions in terms of Dr. Mengele’s intentions, but she agrees to cooperate when he asks her to organize a day care and school for the Romani children in the camp. Though physically and emotionally brutalized by the conditions at Auschwitz, Helene musters the strength to protect the children in her care at any cost. Through sheer force of will, Helene provides a haven for the children of Auschwitz—an act of kindness and selflessness so great that it illuminates the darkest night of human history.

Based on a true story, Mario Escobar’s Auschwitz Lullaby demonstrates the power of sacrifice and the strength of human dignity—even when all hope seems lost.


I've been on a World War II phase for a bit now. I think it started with Kristy Cambron's Hidden Masterpiece books and Schuyler McConkey's War of Loyalties. The WWII era wasn't exactly a happy one, and a reader shouldn't expect stories to be quite as full of fun and life as other genres. However, I think the true stories and the true history is important--one that we shouldn't quickly forget. People matter. And that's why Mario Escobar wrote of Helene Hannemann. There are fictional aspects to the story which Escobar details at the end of the book, but I believe most of it is very real and very true.

For most people, the word and place of Auschwitz has the connotation of evil and horror. Rightly so. The stories that have been resurrected from that place have been anything but humane, though the heroes that lived through it sought to provide dignity and hope to those who lived their last hours amid the terror of human experiments and the filth of everyday living. Many of those who suffered in Auschwitz were Jewish. However, this story takes place through the eyes of someone in a different category (at least, in the governments' eyes she was different). Helene is German, but she married a Romani, sometimes known as Gypsy, and together in their happy family they had five children. I don't know if Helene considered herself a Christian or not, but there are several references to her praying or questioning different aspects of spiritual matters. She refuses to leave her children and husband on the day they are called to the camps, and thus gives the rest of her life searching for ways to provide hope and stability to the poor, desperate souls in Auschwitz.

Because of her courage and practicality, plus her nurse training, she gains a leadership position fairly quickly among the barracks of women prisoners. She learns how to interact with Dr. Mengele, who treats her a bit better than the rest and offers her the position of a teacher over a day care/school setting for children in the camp. She soon learns that Mengele always has reasons for what he does.

Written from Helene's point of view, she details the tortures of the work camps, the lifestyle of the prisoners, and the activities of her superiors, though not in inappropriate ways. However, I would still recommend this book from mature readers only, even though countless other children personally, emotionally, and physically experienced the pain of inequality and racism firsthand under Hitler's leadership.

Grateful for Helene's example of courage to us and sobered once again by the tragedy of man's depravity willingly performed on his fellow companions.

*I received a complimentary copy of this book from Thomas Nelson through NetGalley. Opinions expressed in this review are completely my own.
Posted by Kaleigh Stroink at 7/17/2018