War of Loyalties by Schuyler McConkey 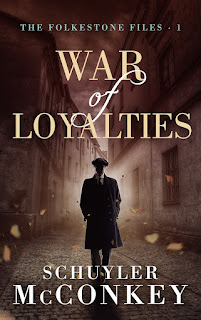 From Amazon:
April, 1917.
A ring of German spies threatens the coastal town of Folkestone, England. Newly-recruited agent Ben Dorroll must uncover which British citizens are traitors to their country. When his first attempt at espionage falls prey to a trap laid by German sympathizers, the security of the British Secret Service is threatened. Feeling lost in a strange country and aching for a steady place to call home, he wants to resign and go back to his American medical work. But when he learns that his family identity holds the key to capturing the spy ring, Ben has no choice but to unite with the mysterious Jaeryn Graham so that the truth can be discovered.

In the aftermath of the Irish Rebellion, Jaeryn Graham's British colleagues look warily on his Irish background. Always up for a challenge, he thinks his new mission in the Secret Service should be an opportunity to prove his prowess. But after encountering death and alienating two agents, he finds the road to victory isn't as easy as he thought. Unless he can win the loyalties of his newest assistant, Ben Dorroll, his secret ambitions and his perfect success record will be destroyed.

So, guys. If you buy any books this year, this one should make it to your bookshelves. And then buy it for all your friends, too. (Jk, but not really.) I met Schuyler while she was working on her last drafts of this book, and I got to read it a little beforehand, but now I finally hold the print copy in my hands. And it's so thick...makes me happy.

I'm not even sure where to start with this book, because just you just have to read it to fall in love with Pearlie, laugh with Terry, and find a peaceful home with Ben and Charlotte. And of course there are so many more characters to love and learn from. This book is set during World War 1 and you'll experience some of the horror of war, the separation of families, the pain of betrayal, and the trust of friends and allies. Because of the variety of characters, I'm positive that each reader will find at least one character who they can identify with while following their struggles and joys to the very last page.

War of Loyalities is (as most well-written books are) 735 pages of heartfelt research, love, and dedication. I'm already a fan of historical fiction, but well-researched historical fiction is even better. Especially when it gets down the little things in daily life. There are moments of happiness and joy, but the sadness of war is a big part. A spy ring is no simple thing, and it's hard to live when your family, friends, and life itself are in danger. I appreciate Schuyler's willingness to tackle moral and ethical issues of war also. There are no easy answers for death, killing, pain, and murder, but that doesn't mean we shy from them. In fact, sometimes it's better we remember.

And so, entering the word of books, in the centennial years of World War 1, we have War of Loyalties. This isn't necessarily a "Christian" book, in the sense that it doesn't make faith it's main topic. However, I pray that, through the lives of the characters who clung to their faith regardless of the situations around them, you will find the hope and peace in the Lord again at the close of 2017.

Well done, Schuyler. Congrats. May this book be just the beginnings of stories and novels to come. Thank you for including me in this journey. :)

“You promised me when we came here that whatever secrets you had to keep, you would remain honest, upright, and God-fearing. God-fearing they may be, and upright I have no doubt, but you have just told me that they are not honest. If they were, you would be able to tell her the truth.”

“I ask you to wait, that’s all. Will you do that?” She lifted her chin resolutely and held back her tears. “I don’t think you have a right to ask me. But I will—if you wish it.”

"The murmured words stirred passion and wonder and heartbreak all in one—a savage, ancient sort of beauty. Then it died away, and after deliberating for a moment, Jaeryn turned back inside, and Ben pursued his own way homeward, rather breathless with what he had overheard."

"The empty house mocked him with its soft comfort and sweetness. How could such an angry soul collect so much beauty around her? From the rosewood wainscoting to the sticks of sweetgrass incense on the hall table, his mother had surrounded herself with all that was pleasing. She’d had that knack all her life. He could resign himself to the injustice, but try as he would, he couldn’t understand it."

"Neither of them knew they were standing where Terry and Pearlie had stood together, for Jaeryn was not there to tell them."

"We will go home soon. And until we do, I will be your home, my love."

“I want…I want a place that feels like home. A place where I can sweep the floors and put the washing on the line and polish the windows, and love it every day. When you were gone I didn’t have anyone to love, but I could always love home.”


"For the present, there was no threat in it and no sadness. Only a deep kind of ache for the past—an ache he was used to and could live with." 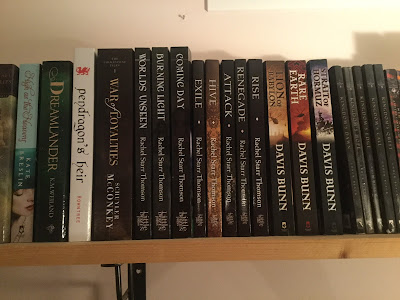 Because WoL deserves to be with books like these... :D