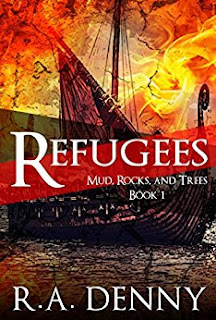 From Amazon:
"An epic journey of a lifetime." That's what three young individuals from three different corners of the world have dreamed about. They were destined for greatness since the moment they were born. But what if they don't want it? What if they're not ready? What if their desires no longer align with the prophecy?

The problem is, they have no choice. The star has appeared. Their destiny has already begun to unfold.

It's not the send-off that they've been dreaming of. Forced out. Banished. Raided. This wasn't how it was supposed to be. Now they must discover who they really are while embarking on the most exciting journey of their lives. One star. One impossible task. One chance to save the world they love.

About one month ago I received an email from R.A Denny herself. I have never had a personal request to review a book from someone before and I wasn't sure what to think (well, at first I thought it was just spam because that's all I typically get on my blog email address). However, I took a second read-through, and was pleasantly surprised that she read my reviews and took the time to explain her book and comment on what I had read and reviewed. Then I got a bit excited. ;)

This book is the first in a series of six Mud, Rocks, and Trees fantasy novels. Each landscape has it's own story and characters. And because it's fantasy, the author can make the land and people as she likes. I love the creativity R.A. Denny uses in designing her book: Webbies, humans, Gliders, Samalitans, fliers, Armored, hydois, chamois, Sparaggi, and many more such names live and act in the city of Tzoladia.

Refugees tells the personal stories of Amanki, Brina, and Moshoi as they each realize from the certain star that appears one night that they have predetermined plans to fulfill. From the start, their journeys are filled with friendship and challenges. Their families may or may not agree with the call placed upon them. They have limited information as to how to get where they're going, and sometimes they even lack supplies. But they end up realizing that while they appear to be refugees from the start, they have the most important task of their time. And they don't even know each other, but their paths will lead to one fulfillment of one star and one prophecy. And each three characters are joined together somehow through the influence of Baskrod.

Though subtle, the themes of Scripture run throughout these intertwined stories. I'll let you see if you can find them yourself. ;) Amanki, Brina, and Moshoi learn something of the evil that desires to take over their world, and of the spiritual promptings of those who guide their steps. And throughout the days they even find out more of their personal history than they even dream of. Even the star they follow sometimes takes different forms.

I'm glad this author contacted me and asked for a review, and perhaps one day I'll buy all the rest of the series and finish what I started. Well done, R.A. Denny!
Posted by Kaleigh Stroink at 6/05/2018