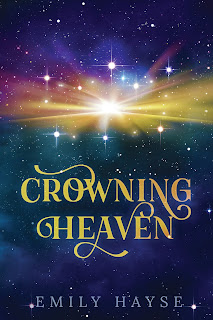 From Amazon:
Heaven Cassidy has only ever wanted one thing: a family. But when she opens a letter from her long-lost mother, she finds herself running for her life. Swept into a world of proud queens and ancient feuds, Heaven must decide whether her dream is worth taking on the responsibility of two kingdoms, one of which wants to crown her and the other to kill her.

I was so privileged to receive an ARC ebook of Crowning Heaven, and I've decided that the cover is quite perfect. The stormy blue background studded with stars and a flash of light is just like the story itself. Crowning Heaven is actually about placing a crown on the head of a girl named Heaven. I have to say that because I had heard and read the title for a while before I actually realized that it wasn't some doctrinal book about heaven and the crowns in it. (Yes, I know, not everyone's mind goes there, but mine does. :P)

There are a few books that have been or are being released currently, and some of them you just must have. This is a must have. The characters are beautifully portrayed and I love how they grow and change. Two worlds intersect when Heaven is born, though she doesn't even know it yet. She knows little of her parents, but the few things she finds out change her world completely. The first few lines of the story set the time period and capture the scene immediately. Heaven learns to love her new family and take up the role Rodhacar and Castellan give to her. Not many people can bridge the gap between these two nations, but there are a few who do, and Heaven finds out how just very important she is to the uniting of the warring countries.

Emily Hayse excels in writing and portraying emotion. I sorrowed when characters died, but the joy among friendships was well worth it. Heaven finds out she needs to pursue marriage as a way to give her strength, finances, and armies. While I was surprised at the way she chose her suitors, I loved how Emily brought about romance in countries that typically married for convenience, rather than love.

The fantasy elements were also intriguing. I enjoyed the portal between the worlds, and how technology spanned Earth and Rodhacar. Also, because I love horses and riding, I quite enjoyed the fact that everyone rode horses instead of cars. ;) Heaven journals, too, and because her character is similar to me in many ways, Heaven's writing and life desires were something I could quickly identify with and see how they molded her thoughts and actions. My favorite characters would be (besides Heaven) Tyr, Athen, and Breac. Thrasi, Lysander, and Nic also hold special places in my heart.

I wish I could do justice to this story with a review, but you will just have to read it yourself now that it has been released!! Heaven's story and the people who live with her and die for her will stay with you even when you close the last page. And for my fellow Christian readers, I believe this book will provide a glimpse into what it means to fight alongside your brothers and sisters in unity, while also living or dying for truth. Fantasy books typically parallel that of our physical or spiritual world, and this one is no different. Heaven's quiet courage, Athen's steadfastness, Breac's sacrifice, and Nic's protection are just a few of the people and character qualities that we would do well to emulate in our lives.