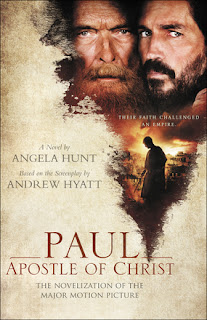 Back Cover:
His Story Will Change the World, But Only If It's Shared in Time

Paul, Apostle of Christ is the story of two men. Luke, as a friend and physician, risks his life every time he ventures into the city of Rome to visit Paul, who is held captive in Nero's bleakest prison cell. Before Paul's execution, Luke resolves to write another book, one that details the beginnings of "the Way" and the birth of what will come to be known as the church. But Nero is determined to rid Rome of Christians.

Paul has survived so much--floggings, shipwreck, starvation, stoning, hunger and thirst, cold and exposure--yet as he waits for his appointment with death, he is haunted by the shadows of his past. He wonders if he has been forgotten . . . and if he has the strength to finish well.

Two men struggle against a determined emperor and the frailties of the human spirit in order to bequeath the gospel of Jesus Christ to the world.

The movie Paul: Apostle of Christ released mid-February, and while I haven't watched the movie yet, I was eager to read the novel based on it by Angela Hunt. I was first introduced to her through the  ebook Egypt's Sister and recently just reviewed the second book in the series, Judah's Wife. She writes persuasively and compellingly while documenting history. I also appreciate that the fictional parts of her books are realistic and not over- or under-done.

While indeed a life account of Paul, this book is written more from Luke's perspective, and as he was a doctor, I loved how he saw the details of life and the medical sides of issues. And perhaps, he was the most fitted to interact with Paul, in that, he could offer healing and aid physically while also giving encouragement and stability through Paul's hardships.

Paul remains in prison throughout most of the story, but he and Luke work together to write the book of Acts: a record of much of Paul's activities. The Roman life is described as the horror it could be with the torture of Christians and the imprisonment of Paul, but it is not extremely graphic.

I didn't know whether I liked the frequent introspection of Paul. While I realize that a man like himself, with a past of persecuting Christians, could undoubtedly bring guilt and sorrow to his mind, I don't know that it was consistent with his teaching in Scripture on forgiveness and pressing towards the calling of Christ. Obviously, I don't know everything about what went on in Paul's mind, as most of his stories and books are history and doctrine, but if Hunt intended to gain empathy for Paul from the reader, she certainly did. Luke, too, struggled with anger, and I wasn't sure that I agreed with that either, but she did do it well to make the characters more human. I think sometimes we can forget that people like Paul and Luke were also like we are and do struggle with certain sins.

Aside from those points, I just loved reading all the words that Paul spoke knowing that now I hold (many) completed Scripture in my hands with the words he was inspired with so long ago. It makes Scripture come alive in many ways. Hunt also did well with portraying Roman believers (or those sympathetic to Christians) and other believers who ended up responding in wrong ways to Nero's persecution. Witnessing is frequent and believers challenge those outside Christ to evaluate their faith and eternal well-being. Hospitality is the mission of Aquila and Priscilla's life, and I loved their role in the book--that of being a harbor and safe place for Christians. Paul's gospel and the message to the world was proclaimed further than he would have ever thought, and throughout this book I was encouraged in my own personal faith.

*I received this book free from the publisher. All opinions expressed are my own and I was not required to write a positive review.
Posted by Kaleigh Stroink at 5/15/2018