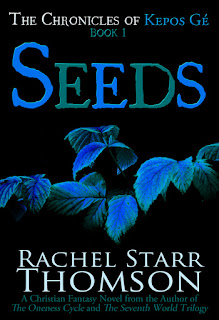 Book Description:
In the fantasy world of Kepos Gé, a young woman flees her past by joining a frontier settlement on the edge of the wilderness. But she can’t escape the threats abroad in this new world — or the wild things growing in her own heart.


Something is deeply wrong in Jerusalem Valley, where the persecuted religious faction called Tremblers are trying to create a new society. As Linette Cole struggles toward acceptance and newfound faith, friends turn to enemies and enemies become friends.
Soon Linette will face the greatest challenge of her life:
Because words have been spoken.
And words grow.
SEEDS is page-turning Christian fantasy — a novel about a wild frontier, monsters in the shadows, and a world trying to hold onto a fragile peace even as dark forces conspire against them.

It's another book, friends!! So very excited to review this book before it releases on the 18th, Lord willing! Rachel Starr Thomson is publishing again and this is an amazing story.

The prologue introduces us to two differing factions, Sacramenti and Puritani (Pure People), who were each convinced in their own minds that they were following the Truth about the Kaion and all mankind. The Kaion consisted of Father, Son, and Fire Within. From the main factions of Sacramenti and Puritani, smaller divisions broke out and the Imitators and Luminaris (Tremblers) were born.

In the New World, Herman Melrose, a Trembler, was weighted with the responsibility for raising up a new order in the unknown land. The Imitators also had their own plans however. Linette Cole opens the first chapter while she embarks into this new land, not knowing who friends or enemies are, and still not yet ready to face her past. And Herman struggles to lead a colony in peacefully welcoming and accepting anyone despite their faction or belief. Serena, too, being lit by the Fire Within receives her own task--one that will take courage, bravery, and sacrifice.

I love this book because I can see how it parallels the truth divisions today. I have personally experienced the difficulty in witnessing to people simply because of their misunderstandings of the different beliefs that all Christians hold. In this book and in the series that will come later, I believe Rachel is trying to address that in Kepos Ge and its citizens. While each of the characters is human having hearts and veins, they also have seeds and vines, showing how they differ and also bringing them a special gift that they can use to benefit others. Of course, like in our real world here and now, there is much darkness and evil to be fought against. There is terror and pain. There is the threatening past and sorrow. But in it all, despite the prisons, the inquisitions, the death, and betrayal, characters learn to love, to sacrifice, and to accept. Rachel also paints a beautiful picture of salvation, and also of renewal in a Christian's life.

The book closes with challenges ahead, with more pain and sorrow, yes, but also with the promise that the Father, Son, and Fire Within would guide and help those who sought to live the Truth of the Kaion.

Another must read from Rachel, and I can't wait to hold the completed series in my hands one day. Well done!

While I haven't reviewed many of Rachel's books yet, she is one of my favorite authors, and you can find out more about her and her books and Lifetime Readers' Club HERE. I think there are also a few free books on her website as well. So go take a look! :)
Posted by Kaleigh Stroink at 1/15/2018