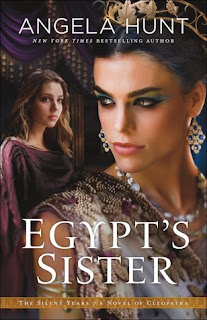 From Amazon:
Five decades before the birth of Christ, Chava, daughter of the royal tutor, grows up with Urbi, a princess in Alexandria's royal palace. When Urbi becomes Queen Cleopatra, Chava vows to be a faithful friend no matter what--but after she and Cleopatra have an argument, she finds herself imprisoned and sold into slavery.

Torn from her family, her community, and her elevated place in Alexandrian society, Chava finds herself cast off and alone in Rome. Forced to learn difficult lessons, she struggles to trust a promise HaShem has given her. After experiencing the best and worst of Roman society, Chava must choose between love and honor, between her own desires and God's will for her life.

The Intertestimental Period isn't one we know much about, and while this silent era spans 400 years between the Old Testament and New Testament, history didn't not end. People kept living and growing as the Lord intended them too. There is much we don't know about these years, and many questions we might have, but some of them won't be answered until we reach heaven. Angela Hunt's story during this period captures a little of what it might have been like and what people might have done.

The history intwined in the pages of this book is amazing. I love how Hunt captures the culture and beliefs of the Jews. HaShem is the name Hunt uses most for the Lord God in the book, and I think it brings the Jewish faith and practices into reality. She uses rabbis, and Scriptures, and other writings to emphasis the continuation of the Old Testament in the lives of the family of Chava. While I don't necessarily care for the way Chava's father continually sought to arrange her marriage and the way in which HaShem supposedly revealed His will to Chava, I don't think they are misused by the author. The Lord does indeed speak to His children in different ways, and some parts of culture (arranged marriages) did, and do, exist.

I love Chava's commitment to HaShem's will. She denies herself, her passions, and her desires because she delights to do the will of God. She suffers for it, and while she searches for resolution in her life, she continues to find refuge in HaShem's words and vision to her.

Cleopatra is an interesting character. I appreciated how Hunt wrote of the pagan, Greek and Roman society without condoning it. Cleopatra's life is not one lived under the guidance of HaShem and royalty's lives are riddled with immorality and violence. While the Jews would never dream of living in the manner of the Alexandrians, they know how to worship despite the culture around them, and they know how to interact and live with those who blatantly sin.

Among the death and sadness that surrounds Egypt and Rome, the Jews continually await the coming of Mashiach--the Prince of the world mentioned in Daniel's prophecy. This is a theme that unites the book and gives the people hope in a pagan culture.

The Author's Note was amazingly helpful. I loved how Hunt detailed which historical details were fictional and which weren't. Because I love history and fiction together, I learn a lot when history is woven into a story. This is a beautiful story of God's revelation to a faithful Jewish girl and His redemption in a nation despite the darkness of the culture.

*I received this book free from Bethany House Publishers. All opinions expressed are my own and I was not required to write a positive review.
Posted by Kaleigh Stroink at 7/10/2017