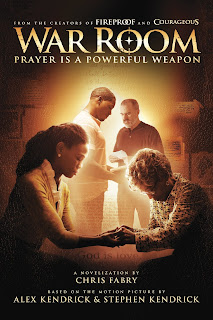 Back Cover:
Tony and Elizabeth Jordan have it all — great jobs, a beautiful daughter, and their dream house. But appearances can be deceiving. Their world is actually crumbling under the strain of a failing marriage. While Tony basks in his professional success and flirts with temptation, Elizabeth resigns herself to increasing bitterness. But their lives take an unexpected turn when Elizabeth meets her newest client, Miss Clara, a wise, older widow who challenges Elizabeth to start fighting for her family instead of fighting against her husband.


From the award-winning creators of Fireproof and Courageous comes War Room, a compelling drama with humor and heart that explores the power that prayer can have over marriages, parenting, careers, friendships, and every other area of our lives. 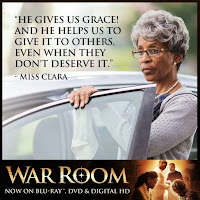 The Kendrick brothers and the Sherwood Pictures films have had incredible impacts on Christians and non-Christians alike. Providing hope and encouragement to thousands, they once again presented a powerful message through their latest film War Room. However, this isn't a movie review, but a book review. Hundreds of books have movies made about them, but several (if not all) of the Sherwood movies have books written after the movies. This is one of them. I read the Courageous book after viewing the movie, and while I was unsure of what I would think, I was amazingly surprised. I had no hesitations about reading War Room after seeing the movie, 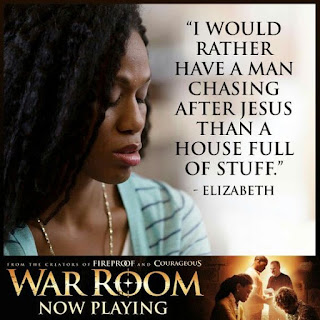 While this book centers around Tony and Elizabeth's marriage and family, I especially loved following Miss Clara's story. In the movie, she's mainly the mentor for Elizabeth and indeed that is her position for most of the story. However, a book is able to take the time to enter into each person's thoughts while a movie cannot. Living in Miss Clara's past and hearing her thoughts left me thinking that I got to know her by sitting where Elizabeth sat. Maybe even drinking some of that lukewarm coffee. ;)

Some of the lines I could tell were taken directly from the movie, and I appreciated how the book stayed true to the movie, only adding in extra scenes, thoughts, and dialogue. One of the other things I appreciated about this book is the added scenes regarding Elizabeth's struggle to trust her husband. While she didn't know what was going on in his life all the time (and that didn't automatically change once he repented and surrendered to God), she knew she needed to trust him in order to effectively produce lasting change in his life. You see Elizabeth learn to respond, pray, and interact in solid, biblical manner once she has repented of her own faults. See, in relational difficulties, it won't help to recognize another person's faults--we all know other people have faults. It's only when Elizabeth decides to change her own life and become a prayer warrior that she saw others around her change. 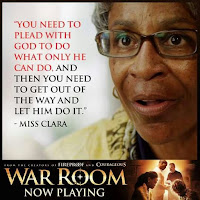 Tony and Danielle's relationship is also detailed more in the book. Danielle wants her father's affection, but senses that he has no time for her, causing her to draw back from him (and his angry outbursts also push her away). Her development throughout the story is precious, and her comments are just as funny as in the movie. Each time I read one of her lines I could hear her voice in my head.

So yes, definitely read the book. It will fill in all the little spaces that a movie cannot. Worth a read.
And maybe a thought or two. ;)