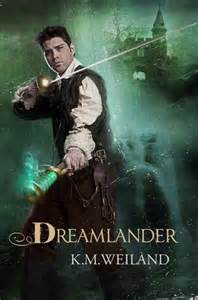 From Amazon:
What if it were possible to live two very different lives in two separate worlds? What if the dreams we awaken from are the fading memories of that second life? What if one day we woke up in the wrong world?

In this fantasy thriller, a woman on a black warhorse gallops through the mist in Chris Redston’s dreams every night. Every night, she begs him not to come to her. Every night, she aims her rifle at his head and fires. The last thing Chris expects—or wants—is for this nightmare to be real. But when he wakes up in the world of his dreams, he has to choose between the likelihood that he’s gone spectacularly bonkers or the possibility that he’s just been let in on the secret of the ages.

Only one person in a generation may cross the worlds. These chosen few are the Gifted, called from Earth into Lael to shape the epochs of history—and Chris is one of them. But before he figures that out, he accidentally endangers both worlds by resurrecting a vengeful prince intent on claiming the powers of the Gifted for himself. Together with a suspicious princess and a guilt-ridden Cherazii warrior, Chris must hurl himself into an action adventure battle to save a country from war, two worlds from annihilation, and himself from a dream come way too true.
Dreamlander is an incredible book. While running an intense plot line, this story has so many sweet, convicting moments that I could identify with. I loved how the two worlds connected with one another, yet remained separate as well. The characters of Allara and Chris are ones that many readers will quickly relate to. As a Christian, I quickly identified the Biblical allusions and plot structures. I love how the flaws and virtues make each character who they are. Human nature has consequences, but there is always redemption for those who seek it. The characters wrestle with themselves, each other, and with trust in the Garowai (God-like figure). Evil was evil, humanity was human, and the "higher-being" was God-like. This book is sequel-worthy, and I'm hoping it comes out soon!


"That cliff you're trying to hang onto is crumbling, Allara. It's time to let go." One of the themes of his books letting go of fear and allowing One more powerful to take control. Fear does not mean the absence of courage, but rather the bravery to take action despite those fears--even if it means losing something we love. Anothe theme is this: Our best efforts do not necessarily end in healing for ourselves or others; sometimes the "worst" has to happen, so Another may bring the results we so much desire.

When Chris looked at her, she had the eerie feeling he was seeing past all her defenses, straight to the core of her, and whatever it was he saw there— the anger, the fear, the weakness— he accepted it without judgment.
//
Kindnesses were dangerous. They shattered defenses and left the receiver naked and vulnerable.
//
She studied his face in the flicker of the light. “You have your good points.”
He raised his eyebrows. “I do, do I?”
The back of her neck warmed, but she held his gaze. “You’re smart, you’re brave. Stubborn.”
“That’s a good point?”
“As one stubborn person to another, take it for what it’s worth when I say yes.”
//
She’d learned the hard way that hope was the sharpest weapon of all.
//
He opened that long-closed door in his soul, just a crack. A crack was more than enough to let him know his family still had the power to break him with his grief.
//
When had something so simple as belief become so wrenchingly unachievable?
//
She would choose faith over fear, no matter how much she had to sacrifice. She would believe the God of all was true to His promises.
“Prove to me,” she whispered. “Prove to me You’re real. Give me a reason to believe.”
//
“Here.” He lifted the jiswar into her arms. “You have the distinct appearance of a woman in need of something warm and furry.”
//
“Take care of yourself.” His face softened. “Don’t jump off the cliff until somebody’s around to catch you.”
Posted by Kaleigh Stroink at 4/28/2016