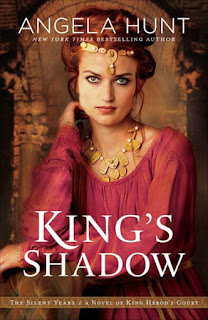 From Amazon:
Two women occupy a place in Herod's court. The first, Salome, is the king's only sister, a resentful woman who has been told she is from an inferior race, a people God will never accept or approve.

The second woman, Zara, is a lowly handmaid who serves Salome, but where Salome spies conspiracies and treachery, Zara sees hurting people in need of understanding and compassion.

Powerful and powerless, Idumean and Jew, selfish and selfless--both women struggle to reach their goals and survive in Herod the Great's tumultuous court, where no one is trustworthy and no one is safe.

This possibly the hardest book of Hunt's to review. If you've read my previous reviews of her books set during the 400 Silent Years, you know they are packed with truth of the Messiah and history (and fiction) of the culture and times of the Jews and the countries around them. This book is no different, except that it is more complex in political and relational ways. Salome is King Herod's sister, and the person he trusts the most. Herod is placed on a precarious throne: under Rome, but in command of the Jews. Herod must appease both culture, nations, and religions in order to survive. His sister is perhaps the most important person helping him do just that. She and her servants are his eyes and ears, and no matter what she remains loyal to him. I found this special to see in a sister. Usually we read stories about wives or husbands or friends showing that kind of selfless loyalty, but not often do you see a woman who is hated by many, but clever, diplomatic, and able to serve the interests of the palace and Jews.

This is a time of turmoil and chaos. There is constant death even in the palace, as families vie for the throne and murder each other in order to gain it. Relations with Antony and Cleopatra are also a large part of this story, at least from a distance. The weight of ruling a nation weighs on Herod and Salome also bears that weight with loyalty and grace. Though neither would be considered believers in the God of Israel, Herod is half Jew, and therefore performs sacrifices and celebrations as the Jews do, but without heart.

Zara begins the story as an innocent girl growing up in a typical Jewish home. Soon Herod and Rome's men bring disaster and pain to her family and she matures quickly as she faces death and uncertainty. At a young age, she is betrothed to a sandal-maker's son: the best option to make sure she was at least provided for if anything should happen to her family. However, she is clever with her hands, and God has another purpose for her life. Soon she is brought to Herod's court as Salome's servant. She has freedom of movement within the palace, and performs important work for her mistress.

Herod's decline begins with his execution of the wife he adored (but couldn't trust). His mother-in-law is ever-scheming for ways to have her line on the throne. Zara is forced away from her family to work in the palace, and Salome is loyal to a fault to her brother and his work. Yet in the fear, uncertainty, and broken dreams of them all, God is preparing His nation for the Son he will send. Herod, too, is an instrument in God's hands, whether he realizes it or not, and Zara begins to search and find out who this HaShem is to her personally. And in the end we see the hope of the Son of God come to us: Immanuel.

I feel like this book didn't have much hope in it. It was a time of turmoil and death and scheming royal families. It's heartbreaking, but I think Hunt did well with what she had. Under the shadow of the King's court, God placed His Son. Here's to the fourth and final book of the Silent Years series!

*I received this book free from the publisher. All opinions expressed are my own and I was not required to write a positive review.