From the Dark to the Dawn by Alicia A. Willis 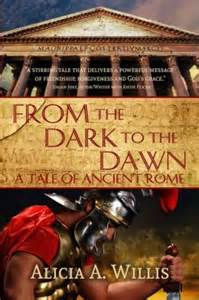 From Amazon:
Decadent Rome, 61 Anno Domini. The masters of the universe have crushed the Iceni rebellion with an iron hand, slaughtering and enslaving her people.

For Philip, his existence as a captive means living to hatred. He despises his rich, young master, resenting his life of servitude and the wrestling feats Marcus forces him to perform. Bitterness engulfs his soul until he only lives for the day when he will crush the might of Rome.

Then Christianity enters the picture. Taught by a Jewish breadmaker to know the man called Christus, Philip begins the struggle to forgive and honor his master. But forgiveness is not easy towards one who lives for himself.

Marcus Virginius knows nothing but power and pleasure. Destined to a successful career serving Nero in the Praetorian Guard, he wants no part of Christianity. And he is determined to crush Philip’s newfound faith – no matter what it takes.

Join Philip and Marcus in their journey of redemption, faith, and forgiveness. Is love enough to conquer hate? And will the light of the gospel ever surmount the darkness of Rome?

Persecution abounds – will the two young men survive its terrors and live to experience the bright hope of a new dawn?

Alicia Willis is one of my favorite Christian modern authors. I got this book free on Amazon almost two years ago, and I just finished my second time through it. It's one of those books you want to read again and again, but the intense plot makes you read it less, but think through it more.

There are not many authors who can capture the horror of slavery and culture without dwelling on the painful or gory details, but Philip's life and the general Roman culture is described in a way that deepens our understanding of the times, but also points to a future greater Dawn.

Philip's journey to salvation is a hard road--made harder by his master. Though his master is just and fair in most of his dealings, he uses his authority to attempt to disuade Philip from his faith. Marcus's growth as a character is perhaps the most surprising, since he is a person of great wealth and power.

This is a story of the time of the martyr's under Nero, and this story does not hide the reader from the intense persecution. The countless Christians who died under his reign are still not forgotten, and though this story has fictional characters, the story of persecuted Christians is the same. The closeness of the Christian brothers and sisters is a joy to read, because the friendships and relationships are pure. They stand for one another and do not give in despite persecution. They reach out to the lost, regarding not their own lives.

Besides Philip, Alexander and Diantha would be my two favorite characters. I love how Willis gives us insight into all three of these characters minds (some more than others). We see their mental struggles, but we see the power of Christ shining in a dark place. This is a story of much sorrow, but yet of much hope even in the pain. Broken hearts that rejoice. Slaves that conquor. Death, yet life everlasting. Darkness, yet the Dawn. A story that leaves you serious, but with an internal never-fading joy. Definitely a book worth reading again and again.
Posted by Kaleigh Stroink at 10/04/2016

Email ThisBlogThis!Share to TwitterShare to FacebookShare to Pinterest
Labels: 2016, Alicia A Willis, Dark to the Dawn