The Temple and the Tabernacle by J. Daniel Hays 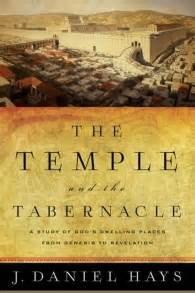 At various points in Israel's history, God dwelt in specific, significant places, most notably in the tabernacle and the temple. These structures, meticulously planned, extravagantly furnished, and regularly frequented by the devout, were more than just places of worship and sacrifice. They were pictures of God's relationship with his chosen people and of the atoning work that would be done by the Messiah. To understand the tabernacle and the temple, then, is to understand how we are brought into God's family through the sacrifice of his only Son, Jesus.

Visually stunning and theologically rich, this full-color resource brings together the latest scholarship and archeological discoveries to bring God's dwelling places alive for modern believers. It places these important structures in their historical and theological contexts, connects them with the overall biblical story, and shows how they bring meaning and depth to the faith of Christians today.

This was a book that I was really excited to receive. I first encountered Hays writing during one of my university courses. His book called Grasping God's Word was one of the required resources, so I became familiar with his approach through my assignments.

The Temple and the Tabernacle takes us through the history of Scripture, describing Eden as the first place where God's presented His glory. Hays also devotes a chapter exclusively to the study of the original languages and the words used to describe "temple" and "tabernacle". Hardly a page goes by without a picture of an artifact, map, quote, or other extra feature. I loved just skimming through the pages and seeing all the pictures. Definitely a highlight of this book. Using frequent and consistent Scripture passages and verses, Hays describes the first tabernacle's structure and features, reminding us that God then filled the tabernacle with His glory.

Hays is careful to caution us against imaginative and prophetic interpretations of Scripture. I so appreciate Hays for this, as today's culture of Christians tends to interpret Scripture based on individual experience or opinion, rather than Christ and the Scriptures.

"Solomon's Temple" was the most eye-opening chapter for me, in that it described the circumstances of Solomon's life and actions. While many of us tend to remember Solomon for his temple and for his wisdom (things that did indeed occur), few remember that his life was not one marked by obedience to God. In fact, there is little in Scripture, if one studies carefully, that condones anything that Solomon does. I always thought of Solomon as a king who started out well and ended badly, but in reality, he didn't really start out well at all. But you'll have to read the book to get more details. ;) While God's presence once again fills the new temple, corrupt worship becomes the norm and Solomon's kingdom crumbles. Hays describes the departure of God's glory from the temple in the following chapter.

The history of the second temple is then chronicled. Despite political turmoil, Ezra and Haggai encourage the people to rebuild the destroyed temple, and as history passes, this temple becomes known as Herod's Temple. However, this temple is not one that is filled with God's glory, but rather consumed with man's corruption, and until the Son of Man Himself walks through it's doors and overturns those who bought and sold there, there is no record of God's glory entering this building.

Hays concludes the book with a description of the temple during the New Testament era and during Jesus' life on earth. He discusses the presence of God and Jesus as the true Temple, along with the heavenly tabernacle and earthly temple. The final chapter sums up the book's descriptions and discussions by stating that we today live corum deo--living in the presence of God, under the authority of God, to the glory of God. Our worship here is only a shadow of what is to be in heaven. Yet those shadows are here to remind us what we are waiting for.

There was an aspect of this book that I didn't care for, however. In detailing the history of Scripture, events, places, and people, Hays frequently uses words such as "possibly", "maybe", "likely", and "perhaps" when detailing things that could have happened, but for which we have no documentation. While I was grateful for the extra details, I thought that the repeated use of such words and the frequent statements of probability took away from the credibility of Scripture or the author's words. I would have prefered just to read the history which we know for sure did take place, rather than gathering extra details and speculating on them when the chapter closed. But that is personal preference, and it may not bother another reader at all.

Besides the point I mentioned, this is a great resource on the temple and tabernacle, and it gives a wonderful glimpse into how history causes Scripture to come alive. A good book to make you think about the glory of God and how we as believers are called to live out His glory in our own lives while we wait for the final glory of the holy city, the new Jerusalem.

I received this book free from Baker Books through the Baker Books Bloggers www.bakerbooks.com/bakerbooksbloggers program. The opinions I have expressed are my own, and I was not required to write a positive review.
Posted by Kaleigh Stroink at 9/13/2016

Email ThisBlogThis!Share to TwitterShare to FacebookShare to Pinterest
Labels: 2016, Baker Books, J. Daniel Hays, The Temple and the Tabernacle