Lion of Babylon by Davis Bunn 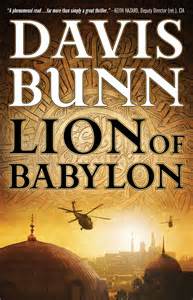 I picked up this book at a biannual booksale this year. I recognized the cover because I also had it in audiobook. I had read a few other of Davis Bunn's coauthored books, some of which I would not recommend, so I was a bit skeptical. But I was pleasantly surprised.

It took me a couple tries to actually get into the book, but once I was in it was hard to stop.

Back Cover
Marc Royce worked for the State Department on a variety of clandestine assignments--that is, until personal issues led to his dismissal.
When Alex Baird goes missing in war-torn Baghdad, State comes calling again. Alex is an intelligence agent--and a close friend of Royce. Three others have also dropped out of sight--a nurse, an aid worker, a wealthy young Iraqi. Are these cases linked? Rumors circulate about a kidnapping conspiracy, yet both American and local officials refuse to pursue it.
Blocked at every turn, Royce eventually unearths a trail of secret encounters between sworn enemies. What he discovers could transform the course of rivalry and reconciliation throughout the Mideast. As the human and political drama escalates, can one man summon the courage to make a difference?

I don't often read books set in current time, but I enjoyed this one. Perhaps the strongest theme of this book is the theme of friendship and trust in relationships. People of different religions and cultures need to learn to trust each other in order to bring about a rescue operation. Marc's loyalty to Alex for all that Alex did prompts him to take on this monumental, risky task, simply because of their friendship. The friendship that grows between Sameh, Bisan, Miriam, and Leyla is precious. Bisan is a dear and she brings laughter and compassion to all her scenes. I loved following Marc through his struggles and mental wrestlings. It's interesting to have him as the center character in the main part of the book, written from his view, and then nearer the end of the book Bunn writes more about Marc from others perspectives. It's an interesting switch, and I think it's a good one. Sameh, also, is a special character and I love how Marc and he are thrown together and must learn to trust one another.

One interesting thing I noticed was the lack of romance. It's hard to find a book that doesn't have it these days, but there was virtually none in this book. One man's wife had left him before the start of the book, another character's wife had died, so perhaps the lack of it was due to those factors. While there were husband-wife relationships, they didn't play into much of the story except in family settings. There were a few comments toward the end of the story regarding a young man and his fiance, but they weren't part of the main plot. And while there was a bit of teasing that went on regarding romance and such, the theme of friendships and loyalty was much stronger, and I appreciated that greatly.

I also enjoyed learning about the Iraqi and Iranian way of life better. Their family values and government system wasn't something I had really studied before, but this story gave me a small glimpse into their challenges and virtues.

The theme of worship is another interesting concept in this book. People are brought together from different religions, lifestyles, sects, and backgrounds, and really have nothing in common except Jesus. While I would have appreciated a stronger Christian message, the few church scenes and spiritual comments and discussions were powerful. The name of Christ can unite even enemies.

An intriguing read and an amazing outcome.

While I have read the other two books in the Marc Royce series, you can find the reviews of them here on another book lover's blog: Rare Earth (2) and Strait of Hormuz (3).
Posted by Kaleigh Stroink at 8/02/2016