Rescuing the Gospel by Erwin Lutzer 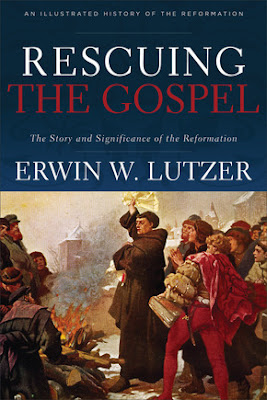 I debated requesting this book because I didn't know if I'd have time to read it, but I'm so glad I did!

Next year is the Reformation's 500th anniversary, and Lutzer takes us through the journey of the Gospel through the lives of some of the most influential reformers. Lutzer gives us the spiritual background history of England, Germany, Scotland, Switzerland, and France in his retelling of the Reformation movement. He write the stories of Knox, Calvin, Zwingli, and Luther in vivid detail, capturing the attention of the reader. Though three-quarters of the book is devoted to Luther's reforms, Lutzer describes each of these men with their virtues and vices. Sometimes Christians look up to these people as almost perfect examples, but they were just humans. But men that God chose to use mightly despite their flaws.

We see the history of the spiritual world and the influence of the Catholic church during these times. The darkness that prevailed in the hearts and minds of the people, and the corrupt spiritual leaders who influenced the people only served to brighten the light of the Gospel once it was rescued from the distortions of man.

Lutzer also describes the different divisions among the reformers, namely the Lord's Table and baptism: two debates that still exist today, and likely will until the end of time. Also the separation of church and state and the discussion of war vs. pacifism. The reformers did not all agree on every doctrine, but one thing bound them together. One thing that led them to support one another and pass the baton to the next man: the Gospel.

Lutzer gives a bit of detail on some of the smaller groups that broke off from the Catholic Church: Anabaptists, Lutherans, Mennonites, Huguenots, Puritans, Dutch Reformed, and Presbyterians. He also comments on the burning of Servetus and the doctrine of predestination regarding Calvin. Lutzer also frequently enlightens his readers on the history and aspects of the Catholic church, detailing how it differs in regards to salvation and worship from the Protestants.

While not an extensive history of the Reformation and the impact it had on the world, this book provides a much needed reminder of the men gone before and the work they did to shine the light of the Gospel in a dark world--a world much like ours today. The Reformation isn't over.

"Despite these differences, that which united them [the reformers] was greater than that which divided them." The reformers lived on the Word of God: sola Scriptura, sola gratia, sola fide, solus Christus, and soli Deo gloria. On the eve of the anniversary of the Reformation, this would be a great book to read to review the challenges men faced to present the light of truth to the world. They weren't perfect men, but they were willing to die for their faith, and they stood on the Word of God because their conscience and convictions held them captive to it.

I received this book free from Baker Books through the Baker Books Bloggers www.bakerbooks.com/bakerbooksbloggers program. The opinions I have expressed are my own, and I was not required to write a positive review.
Posted by Kaleigh Stroink at 6/24/2016