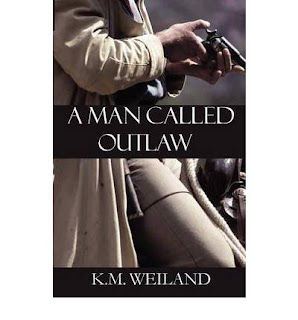 From Amazon
All his life Shane Lassiter had revered the man who stood in place of the father he had never known. Nathaniel Wilcock had taken Shane into his own home, loved him as a son, and placed within his grasp one of the largest ranches in the Wyoming Territory.

But Shane had heard the family saga. He knew the whispers about the fugitive gunman who stood against Wilcock during the land wars that had rocked the valley almost thirty years ago. In Nathaniel Wilcock’s eyes, the gunman was nothing better than a vigilante and an outlaw, and as such he had died. To the people of Hangtree, he was a hero—a martyr who had stood against corrupt power and injustice.

When Wilcock’s greed moves him against the only woman Shane has ever loved—a woman who holds the secret that could resurrect everything for which the outlaw fought—Shane finds himself forced into a place not so very different from that of the western outlaws thirty years ago. He must make a decision, the shadow of which will forever be cast over the lives of all those he loves. It is a decision between truth and power—between honor and life—between right and wrong.
After reading two other books by K.M. Weiland, I think I have come to the conclusion that her books must be read in one sitting. I read the other two in 1-2 days, and this one I read in 1 day. The intensity of the story and the characters makes it nearly impossible to put her books down, and actually it is easier to follow the flow of the book when read at at once (or over a short span of time).

Shane Lassiter grows up knowing Nathaniel Wilcock, as his only father. What Shane doesn't know is the history behind the man called outlaw. This story was an interesting one for me to read. I haven't read many western stories in recent years, but I so enjoyed the history and the characters. Typical of westerns, as well, there are a lot of deaths and shootings mentioned (as a caution to younger readers). However, I appreciated the main character's struggle with right and wrong, and his willingness to finally stand up for what was right--like his father did. The villain's character was portrayed very well (i.e. there is pretty much no reason to end up liking him, except maybe for one statement), especially his ability to verbally manipulate others.

While reading the story, I neglected to pay much attention to the dates at the beginning of most chapters, and thus I was slightly confused as to how the stories merged with one another later on. I think it might have been easier to follow had the chapters been more clearly marked, but I think most of that was due to the fact that I didn't pay attention to chapter markings.

I must comment on the ending, though. *spoilers*
I read two books when I was much younger that ended up with the main (good) character either turning themselves over to the law or dying as a result of their previous character flaws (though they lived a reformed live in the main part of the story). They are not books I would read again by choice simply because of the ending. A Man Called Outlaw is a book that has a similar ending, and though it leaves some room for imagination, it's still not my favorite way to end a book. However, this is one story that I would read again, because it's a gentler ending with a sense of remaining justice and mercy.
*end spoilers*

There is redemption and justice are clearly demonstrated in this story. However, I would have liked to have seen justice meted out to,,,well, the justice system. While the law force was manipulated by one man (as the rest of the surrounding farms were), the law refused to stand up for right when called out on it. But it does accurately portray real life, because not all evil here on earth receives its judgment here. However, there is a day when all wrongs will be made right, and this story points to that very well.

“We fight—” he roared, “not for justice alone, not for truth, not even that we might protect our interests and our families! We fight because our God has summoned us as soldiers! Because we must obey that call to arms! Life is a battlefield, salvation our armor, faith our coat of arms. We are enlisted in a war that must be won— we are engaging an enemy that must be conquered. Either we fight, or we perish. There is no middle ground!”
\\
Why was it that she lit up inside like a sunrise whenever he squashed down his pride enough to dredge up the conscience that [character name] had tried so hard to twist?
\\
How could she ever forget that old promise? That thorn in my heart. She looked back up, her gaze on the door through which Shane had disappeared. “I gave my word. I’m not likely to forget.”
\\
“A ragged cover doesn’t mean the text isn’t all right.”
\\
Even the greatest of saints had suffered terrible things. She knew that. But they had great faith to sustain them. She raised her face again. I don’t.
Posted by Kaleigh Stroink at 5/03/2016